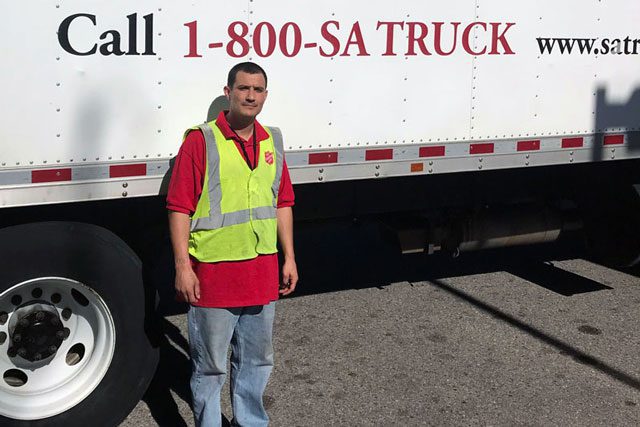 With more roller coasters than any theme park in the world, Six Flags Magic Mountain in Santa Clarita, California, is billed as the “thrill capital of the world.” But even among the playground of mammoth rides, “Goliath” stands out. A true behemoth, complete with a staggering 255-foot drop that peaks at 85 mph and 4.5 G’s, Goliath makes a lot of would-be riders waiting in line reconsider their decision.

Ryan Ramos, 28, was one of them. On a fun day out at the park with The Salvation Army Canoga Park Adult Rehabilitation Center (ARC)—just a quick trek up Interstate 5 from the park—Ramos hesitated when Captain Troy Cook asked him to go on Goliath.

This, however, wasn’t just a roller coaster for Ramos. It paralleled another giant he was battling: his recovery. Ramos came to the Canoga Park ARC in April 2018, shortly before Captains Troy and Felicia Cook arrived as Trainees-in-Charge.

A native of nearby Santa Paula, Ramos’ past haunted him. His father overdosed on heroin when he was 3, and his mother died of breast cancer when he was 15.

When he lost his mother, he also lost his place to stay. So he dropped out of high school, moved in with a friend’s grandma and started working in a warehouse. But the pain of losing his mother was a lot to cope with, so he spent his young adult life “running amok.”

“I started using meth when I was 19,” he said. “Then I got into heroin at age 24 and that’s when I started using everything. My family, my girlfriend didn’t want to be around me.”

His addiction came to a particularly painful head, due in part to his father’s death.

“I told myself I would never use heroin ever, but when my family found out I was using it, they said, ‘You need help,’” he said. “But if you don’t use it, you’re sick until you get your fix.”

Ramos served two years in Santa Barbara County Jail. After being released, he steered clear of trouble for about three-and-a-half years, living in Camarillo with his aunt. But staying sober proved difficult, and missing his parents would soon kickstart the cycle all over again. Ramos spent most of his time doing whatever he could to avoid arrest, but according to him, it was his next arrest that saved him.

“When I was in jail, I asked for a flier for programs outside of Ventura County, because I needed to get out, and go somewhere else,” he said.

Ramos heard the Canoga Park ARC had a reputation for being tough, but he thought that was what he needed. When he arrived, he found that to be even more true than he expected.

“When I first met Ryan, he was new to rules and the recovery program. As many of us do in recovery, we have to learn to deal with authority,” Cook said. “However, I knew he had a good heart and the drive to change his life. Ryan has changed by coming to an understanding that he doesn’t have to understand everything to be able to follow a rule.”

Ramos said it felt like he was getting picked on.

“They would hit my locker, do random searches and random drug tests,” he said. “But I had come in with the mentality that I wasn’t going to listen to anybody. I’d been on restriction seven times and got 15 write-ups. That’s the most in the house.”

It began to wear him down. One day, Ramos said he wanted to leave. It was chapel day, so Cook advised him to first attend the service. If Ramos still wanted to leave afterward, he was free to go.

“The captain talked about what I was feeling, and it changed my mind,” he said. “God puts us through obstacles in life to overcome them, and we have to be strong. I’m happy I made that decision to stay and be strong, because I would have been out there high or dead.”

Shortly thereafter, Ramos turned a corner at the facility when he made the jump from working in the warehouse as a clothing runner to driving trucks.

“It runs in my family,” he said. “My dad drove trucks. Every time I went on routes it got easier, and I realized this is what I want to do. It was so much fun. I like to be around customers, and I like to see them happy when I’m doing something for them.”

As graduation approached, Ramos began to wonder if the ARC would hire him. So he talked to his truck supervisor, and filled out an application. In December 2018, The Salvation Army brought him on board.

“I was so excited,” he said. “I just got a job straight out of the program. That’s new to me.”

Ramos is energized when he works, because he’s clearing hurdles and building confidence.

“The first time I went out on the job, I did three store runs. Most drivers do two,” he said. “Now I’m trying to be a supervisor. I tell my boss every day, ‘I’m going to be like you.’”

Back at the theme park, after some deliberation, Ramos eventually decided to conquer his fear of giant roller coasters.

He strapped in and the ride started moving. This was it. There was no turning back. He chugged up the first hill and shot straight down the world’s biggest drop, before experiencing a moment of total weightlessness.

He loved every second of it.

“At one point during the day Ryan told me that he just wanted to ‘make sure that he does everything the right way,’” Cook said. “I see Ryan is willing to go to any lengths to make sure he continues in this positive path he is on. Ryan knows he has been given a new chance at living life for the first time, and he embodies faith and courage.”