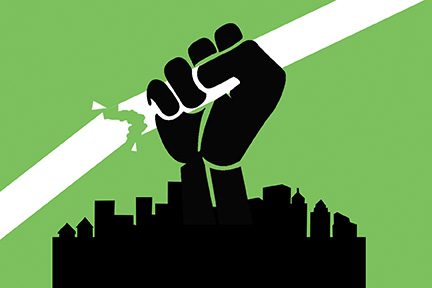 Recent research suggests that growing up in concentrated poverty makes the American Dream much less likely, according to data highlighted in Bridgespan’s May report on “Billion Dollar Bets to Create Opportunity for Every American.” While policies enforcing economic and racial segregation are no longer the norm, the consequences of families being trapped in high-poverty neighborhoods endure. This is the generational despair caused by place-based barriers.

Families clustered in high-poverty neighborhoods face dilapidated housing, restricted access to quality public schools, and limited job opportunities across a spectrum of experience and income levels. The injustice continues: Contaminants such as lead, PCBs, and flame retardants cause prenatal brain damage to tens of thousands of children every year. Then there’s the grinding threat of crime.

The number of people living in high-poverty neighborhoods (where more than 20 percent of the population lives below the federal poverty line) has grown from nearly 54 million individuals in 2000 to nearly 77 million in 2010.

“It’s not just the gangs and violence that take a toll on people,” said Young Life’s Paul Coty, who directs the Christian ministry’s teen programs in New York. “It’s the lethal absence of hope. We’ve got kids who’ve stopped coming out of their apartments in the summer, because they’re afraid they’ll be shot. That level of fear is just fatal for children.”

The number of people living in high-poverty neighborhoods (where more than 20 percent of the population lives below the federal poverty line) has grown from nearly 54 million individuals in 2000 to nearly 77 million in 2010. More than 50 percent of all African-Americans live in such neighborhoods. The data make a compelling case that a child born into such an environment will likely spend the rest of his or her life in poverty.

Neighborhoods of concentrated poverty and distress are not a natural extension of housing markets. Rather they stem from long histories of racially discriminatory policies and practices, as well as systematic underinvestment that have confined low-income, minority families to segregated neighborhoods.  Key factors that contribute to these inequities include:

* Rampant suburban and exurban growth—significantly outstripping population growth in cities—has led to cannibalistic expansion at the expense of central cities and older suburbs.

* Public and low-income housing units were, and sometimes still are, often constructed in ways that concentrated low-income families in specific areas.

* Gentrification in cities has driven up property values, rental rates, and taxes in ways that further push the poor into pockets of poverty within or just outside the city in decaying inner-ring suburbs.

As a result, nearly half of black families living in in the poorest quarter of neighborhoods have lived there for three generations, whereas only one in 13 of white families experience this level of intergenerational poverty in place.

Stanford’s Raj Chetty, along with Harvard’s Nathaniel Hendren and UC Berkeley’s Patrick Kline and Emmanuel Saez, demonstrate how geographic place and economic mobility are inextricably linked. Take Flint, Mich., whose water disaster starkly illustrates the point. A rusty blotch on their 2014 study’s map extends from Detroit to Flint, marking one of the country’s 10 worst regions for upward income mobility.

These findings suggest a two-pronged approach: create opportunities for people living in blight to improve their communities; at the same time, give them the choice of moving to neighborhoods with better resources.

Efforts to move low-income families into middle-class neighborhoods date back to the 1970s, when a desegregation lawsuit forced the Chicago Housing Authority to provide housing-choice vouchers for low-income black residents. Many Chicago families who made the move went on to thrive. Parents had lower rates of obesity and depression, and kids who moved when they were 13 or younger went on to earn incomes nearly one-third higher than those of kids from poor families who remained behind.

Unfortunately, few other cities followed until public housing desegregation suits were settled by the department of Housing and Urban Development during the Clinton Administration. One such was Baltimore. Chetty and Hendren found that a child who grows up in a low-income family in Baltimore (that is, the county equivalent) earns significantly less than any of the 100 largest counties in the country. Yet Baltimore also has one of the nation’s more promising programs for moving people up and out of poverty.

Since 2003, the Baltimore Housing Mobility Project has moved more than 3,200 African-American families out of the city’s high-poverty, highly segregated projects and into low-poverty, racially mixed neighborhoods. The program scouts “high opportunity” communities with low poverty and crime rates, high-quality schools, racial and economic diversity, employment centers, and access to mass transit—attributes that help ensure families don’t simply move to neighborhoods that are just a little less poor. Families benefit from workshops on negotiating leases, financial planning, locating quality schools, and finding jobs. Michelle Green, the mother of four sons, believes she saved her kids’ lives when her family left Baltimore public housing. In her old neighborhood, her teenage nephew was shot during a robbery. With a housing-choice voucher in hand, her family moved to a diverse neighborhood in Columbia, Md. Today, her two oldest sons have graduated from high school and her younger sons are planning for college. “They have made it past the most difficult age and are productive members of society,” she said. “And they are safe.”

Philanthropy can play a role in providing more life-changing opportunities. Based on Chetty and Hendren’s analysis, we estimate that a $1 billion investment in revitalizing communities while also providing greater access for people to move to existing high-opportunity neighborhoods will result in $4.5 billion to $8.5 billion in increased lifetime earnings for low-income children who make the move.

While the data is clear, problems remain. One HUD study found that while families who moved to better neighborhoods were happier and healthier, families with children who were older failed to reap the benefits of greater economic mobility. And every move-to-opportunity effort must still face resistance in more affluent communities. So, these strategies draw on proven practices—such as “buddies” moving together, or community outreach to ensure those moving are welcomed.

Nonetheless, supporting moves alone will not suffice to truly break apart concentrated poverty. Relocation strategies must work in tandem with support for people who want to transform their communities. To achieve the latter, community leaders must identify urgent problems, such as chronic crime and the health impacts of living in blighted housing. It also requires creating mixed-income housing, supporting birth-to-employment education initiatives, and building rideshare programs that let people commute to better paying jobs. More than anything, it requires us to continue to experiment and learn about ways we can better support people in living and thriving in communities of opportunity.

The goal is increased standards of living and social mobility, whether in one place or another.