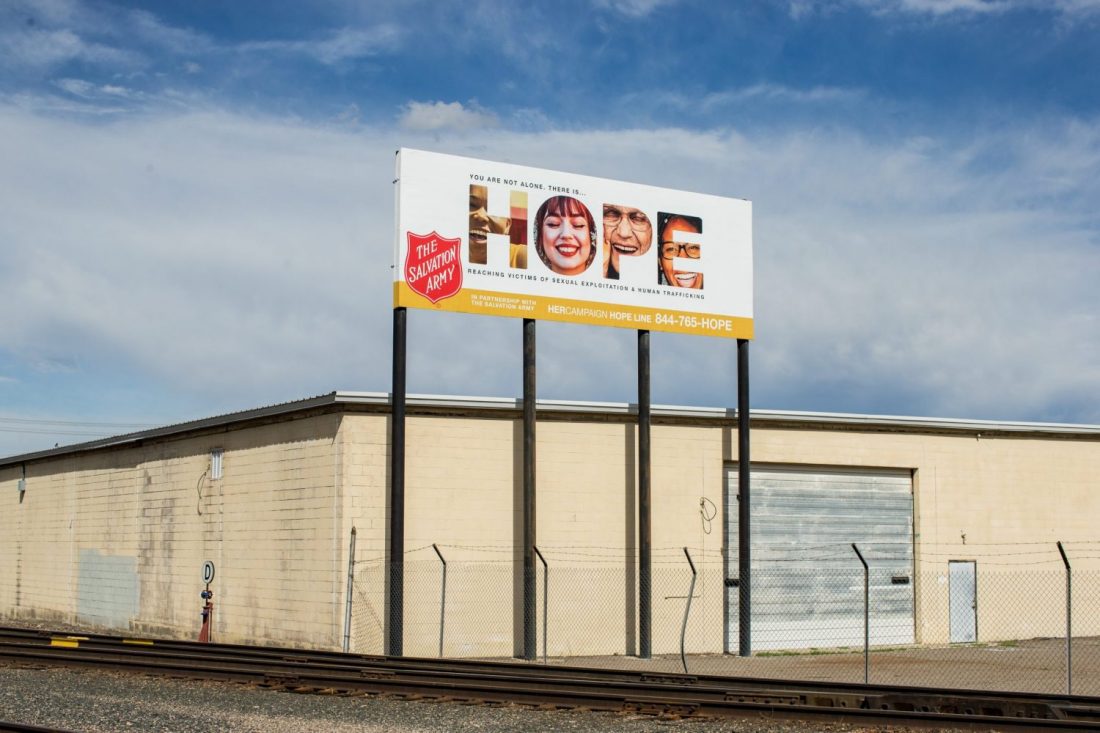 The 24-hour helpline, named the Hope Line, is manned by volunteers of Montana-based anti-human trafficking nonprofit Her Campaign, that connects human trafficking survivors to resources and support. The Salvation Army Billings (Montana) Corps has partnered with Her Campaign in these efforts, using funds from the Fight for Freedom Grant (FFF) to cover costs of creating the billboard and promotional materials for the Hope Line as well as training volunteers.

The FFF Grant provides low-barrier funding opportunities to assist The Salvation Army in creating or expanding justice-related initiatives throughout the West using funds raised during the 2019 Commissioning weekend Run for Others 5K.

“Right now [survivors] can go to the national hotline, but there hasn’t been anything catered to survivors [in Montana],” said Billings Corps Family Services Director Bethany Allen. That was, until the Hope Line launched. “The folks they train and have on the helpline—they are Christians and they provide soul care as well.”

The Hope Line program was launched in January 2020 after Her Campaign began training volunteer phone receivers, holding a pair of trauma-informed training sessions with 12 volunteers. The nonprofit now has four, three-person teams that are on the line a week at a time. Since January, Her Campaign has received 30 calls through the Hope Line, and with the new billboard, it anticipates more.

“The vision for the Hope Line came just to reach specifically women who are being exploited and trafficked here in Montana,” said Her Campaign President and Founder Britney Higgs. “We took it a step further when we had a bunch of people reaching out to us saying the culture of rape was happening here in high schools.”

Higgs said teen girls are afraid to discuss rapes that happened at parties with their parents, and a history of rape can join a number of factors that contribute to making one more vulnerable to being trafficked.

“The goal of the Hope Line is number one, is to create a place for someone to have a caring volunteer to listen to their story,” Higgs said. “Number two—getting them connected to the right resources…Three, if the survivor is wanting to exit ‘the life,’ we want to work with them.”

This year, the National Human Trafficking Hotline has reported 38 human trafficking cases in Montana. Higgs noted the rural nature of the state has proven to make tracking statistics surrounding trafficking difficult. “These numbers are extremely low to the reality of human trafficking in our state,” she said, adding her hopes for Her Campaign to help remedy this in the future.

The need for the billboard is great, Billings Corps Officer Felecia Pederson said. In Billings—and throughout Montana—human trafficking is on the rise.

“Billings being the largest city in Montana is a hub for sex trafficking. We are on the major freeways,” said Pederson. “We have a lot of…homeless teens that feel forced [to be trafficked].”

While the Army sometimes has trafficking survivors come to request services, Pederson said the corps usually refers them to Her Campaign, as they have the infrastructure to care for survivors in place. But it can go both ways. Allen worked with Her Campaign on an exit plan for one of the women living in their housing, helping the client get into Section 8 housing—and it was expedited because she was a trafficking survivor.

“That was a success, she’s doing well and she’s in her own place and thriving,” said Allen.

While the Hope Line is off to a slower start because of COVID-19, it is already reaching people, including a male survivor of sexual abuse who recently lost his mother—his only real support system. A Hope Line volunteer spent 15 minutes listening, encouraging and praying with him. The encounter gave him the courage to seek further help.

A counselor at a local shelter who was helping a woman who was trafficked called the Hope Line, and a volunteer was able to get the survivor placed within Her Campaign’s safe home program where, at age 33, she was able to get her high school diploma, a driver’s license for the first time and job training that led to a hired position.

The survivor graduated the Her Campaign program in June, moved into her own apartment, and has continued in a job that she is passionate about. She also helps to train other survivors stepping out of domestic violence and trafficking and has started to share her story at local events.

“We have been training up an incredible team of volunteers…They’re prepped and ready to go,” Higgs said. “Right now, it’s really just getting the word out in our community.”