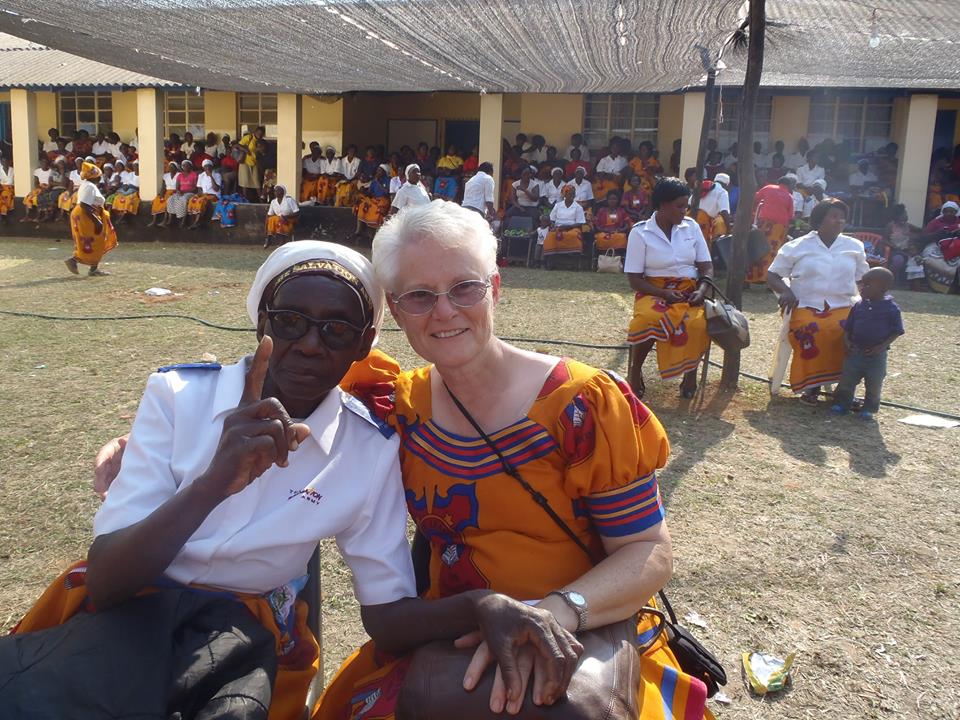 On her last Sunday at the Ndola City Corps, Major Beryl Pierce brought the message and presided at the enrollment of new soldiers from the Mitanda Home for the Aged.

Major Beryl Pierce returned to the Western Territory from Zambia after more than nine years of overseas service with The Salvation Army. In February she will transition to her new position as personnel officer and conference center coordinator at the College for Officer Training at Crestmont.

“How my life has been touched and blessed by God’s mysterious grace and power is beyond my wildest imagination,” Pierce said.

She said she first realized her calling to overseas service at age 6.

“I was standing in a field all alone and had this overwhelming feeling that God was calling me to serve him in India,” Pierce said. “I never forgot that call, but I always thought it not convenient or that I had no special skills to qualify me.”

Residents at the Mitanda Home for the Aged in Zambia, where Major Beryl Pierce served as director.

In 2003, when her son applied to college, God renewed the call. The next year at the Brengle Institute in Chicago, Pierce said she surrendered, vowing to go wherever she was needed.

The Army sent her to Zambia in 2005, where she initially worked in the social and editorial departments at Zambia Territorial Headquarters in Lusaka while helping complete construction of the Mandevu Corps and growing the congregation there.

Her next appointment took her to the Chikankata Hospital in Mazabuka, southwest of Lusaka.

“[This] had been a dream of mine since my teen years,” Pierce said. “I never thought it would come true.”

While there, she helped build three more corps halls and grew four congregations as the corps officer of Chikankata, Kakole, Chipola and Chibuku.

“They are so open to God’s Word; they flock to the altar,” she said. “Their beautiful style of worship is done with the whole body and soul.”

Major Beryl Pierce sits with a Salvation Army soldier at an event in Zambia.

Pierce said she was motivated by what she witnessed day to day.

“I saw so many needs, such great poverty,” she said. “It was difficult knowing that what I could do to help was so small in comparison.”

In 2012 she was appointed to the Mitanda Home for The Aged in Ndola.

“I have had a passion from a very young age for this ministry, and I even hope to continue doing [this] in post-retirement,” said Pierce, who is set to retire in 2016.

“I was privileged to be a part of transforming the lives of our seniors and promoting their quality of life,” Pierce said. “[We completed] a number of repairs and upgrades to the infrastructure, electrical, water and sewer systems as well improved the wages of the employees. So much was accomplished in just two years and seven months.”

She does not take the credit for these accomplishments.

“Truly we serve an amazing God.” she said.

Pierce did keep track of the people to whom she ministered. During her time in Zambia, she took part in the enrollment of 124 senior soldiers, 103 junior soldiers, 56 senior Home League members and 88 junior Home League members. She participated in the training and commissioning of more than 110 local officers and 47 songster members along with preparing five candidates for training as Salvation Army officers. She officiated in the dedications of 256 babies.

Yet, she maintains that there is more to be done.

“The field is ready for harvest but the laborers are few,” Pierce said. “I am indebted to my God, as well as my friends and family in the U.S. who supported me with prayers and funding. ‘Leza amupile’ (May God bless you)! It has been an amazing adventure.”