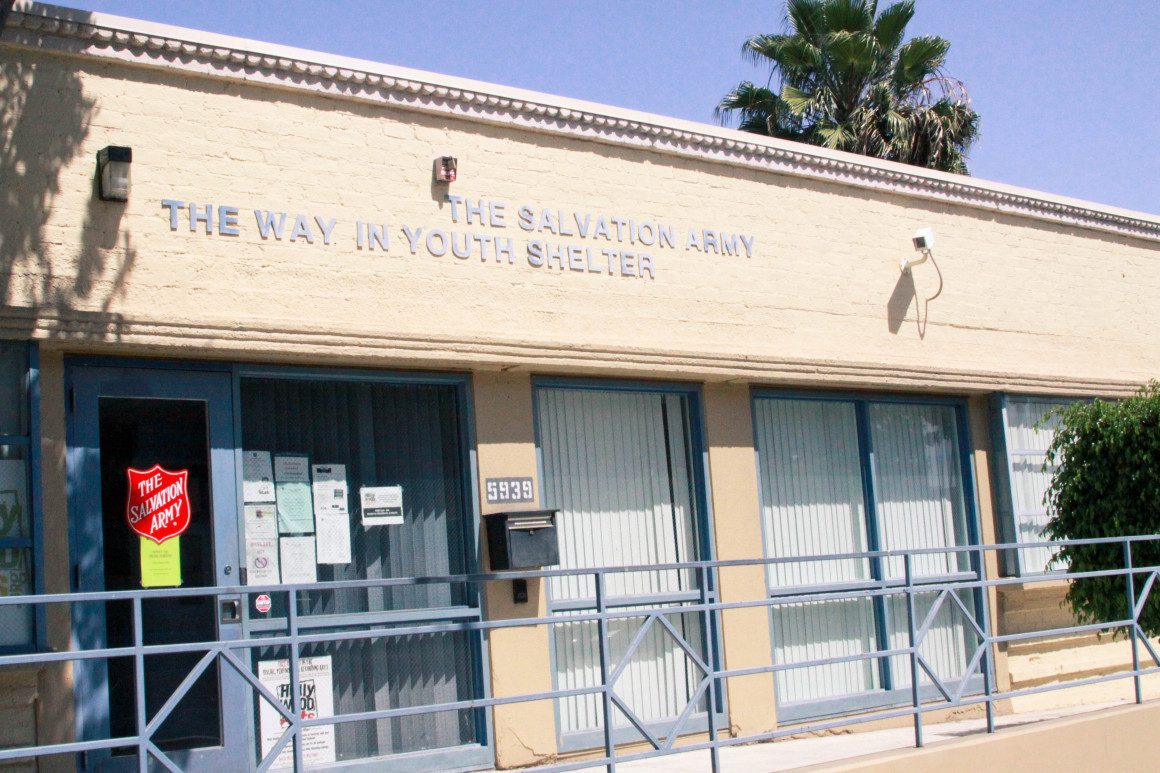 Its glitz and glamour are known the world over.

Home to the entertainment industry, studios and stations dot the map below the iconic, white, 45-foot-tall Hollywood Sign. Yet hiding behind the lights is a population of homeless, drifting youth looking for home.

Karen Bass represents California’s 37th congressional district—spanning Los Angeles from Culver City to Century City, West Adams and Crenshaw—in the United States House of Representatives. Her district includes areas of great wealth and those of deep blight, so “the condition for youth is different depending on the area,” she said. “In areas that are poor, youth are facing issues of gangs, unemployment, and a high concentration of people formerly incarcerated coming home without economic opportunities.”

Being a homeless teen in Hollywood is “bad,” according to Josseline Molina, 21.

“At the moment you think, like, you’re the best and you could do whatever you want,” she said. “You’re young and you don’t see the further consequences, you know?”

As a teen, Molina often ran away from home. She said her drug addiction started at 14, first with marijuana, which eventually led her to methamphetamines. She’s not alone—according to a 2013 University of Michigan study, 36.4 percent of 12th graders use marijuana. The U.S. Department of Health and Human Services found that 60 percent of high school seniors don’t see regular marijuana use as harmful even though THC—the active ingredient in the drug that causes addiction—is nearly five times stronger than it was 20 years ago.

“Usually I tried to go to a friend’s house. Sometimes I would just stay in apartments that were lonely,” she said. “It was really bad.”

She attended court-ordered Narcotics Anonymous meetings, and while in a shelter was referred to The Salvation Army’s The Way In, a program for youth living on the streets or aged out of foster care—the latter amounting to over 23,000 18-year-olds per year, according to the U.S. Department of Health and Human Services Administration for Children and Families. The Child Welfare League of America reports that as many of 36 percent of foster youth who have aged out of the system become homeless.

The Way In Director Karen Wiener

“Our goal is not to transition them to another homeless shelter, but to their own independent living situation,” said Director Karen Wiener. “We want to get them working, get their GED, teach life skills that they maybe haven’t learned—opening a bank account, balancing a checkbook, paying a bill, cooking, grocery shopping or cleaning their home—basic things that we take for granted.”

Clients are often referred from the Department of Mental Health, the Department of Children and Family Services, the Probation Department and other collaborating organizations in the community, including Covenant House, the Gay and Lesbian Center, and Los Angeles Youth Network.

The Way In is a safe place for transitional-age youth to stay. Following intake and goal setting, the first priority for a new client is finding work. He or she meets weekly with a case manager, and attends group and individual therapy, and life skills classes.

An onsite Goodwill office assists with job placement, interview skills and résumé preparation for clients and other youth in the community. Hollywood Arts provides classes in fashion, music writing and dance three times a week.

“When we’re consistent with our program and following through on our end, when they see that then they become consistent,” Wiener said. “They are the ones that have to do the work, we can’t do it for them, we just have to stay on top of them. They don’t always like us because we are a program, we have rules and guidelines and we know that if they follow them they’re going to leave here successfully.”

According to Wiener most clients struggle with marijuana and alcohol use, however The Way In is a drug-free program with a no tolerance policy. In some cases, clients are referred to outpatient recovery programs to first address an addiction.

Josseline Molina with one of her two daughters.

“We recognize that adolescent substance abuse does not occur in isolation from other life challenges,” said Susan Rabinovitz, R.N., MPH, associate director of Adolescent Medicine at Children’s Hospital Los Angeles, in a press release upon publication of “Treating Teens: A Guide to Adolescent Drug Problems.” “Substance abuse may be one problem within a complex of many concerns such as school, family, social, medical or emotional difficulties that influence, and are influenced by, substance abuse.”

Such was the case for Molina. “I was stressing a lot and that made me want to use,” she said.

“We believe that young people have valid reasons for their behaviors and distress, and self-destructive behaviors often reflect an inability to express feelings and thoughts appropriately, or cope with problems that seem insurmountable,” Rabinovitz said.

“Day one [at The Way In] I was nervous, and wasn’t sure what to say,” Molina said. “What made me change was knowing that I didn’t have my kids and I was out on the streets so young…I was grateful for living in an apartment, even though it wasn’t mine and I had to share, to me that was really great.”

Molina found a job working as a laundry and linen distributor at the University of California, Los Angeles. She completed The Way In program and a year of court-ordered Narcotics Anonymous meetings. Now in school to become a dental assistant, she is volunteering in a dentist’s office to gain experience and will graduate in January 2015. She received full custody of her children in July.

“I didn’t really realize what I had, coming to this program helped me realize a lot of things,” Molina said. “If people try to help you out, you know, I think it’s best to take that advice, you know? Everything takes time and it’s really all up to you. Sometimes people go through different hard times, and I just could say that it all depends on you.”