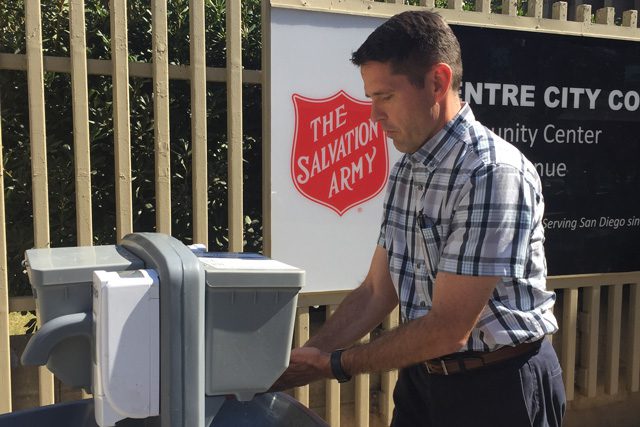 Officials coordinate an effort to stop a hepatitis A outbreak.

Since last spring, San Diego County, California, has played reluctant host to the nation’s second-largest outbreak of hepatitis A in decades. And through it, the county’s called on an unlikely partner to stop the spread of the contagious disease: The Salvation Army.

San Diego County approached the The Regional Task Force for the Homeless (RTFH) board last March, noting that a portion of people in the homeless population, particularly severe drug users, had contracted hepatitis A. But at that point, it was mostly contained within that fraction of the homeless population.

“Over time, the rate increased as it spread to a few who were not drug users or homeless,” said Major Jessyca Carr, Salvation Army San Diego County Social Services Director, who also serves on the RTFH board of directors.

Since then, there have been more than 500 cases, 20 deaths and more than 300 hospitalizations from the breakout. In September, the county declared the outbreak a public health emergency, and in October, Gov. Jerry Brown declared a state of emergency.

To help mitigate the spread, The Salvation Army Centre City Corps—in conjunction with the San Diego Health Department—has held three vaccination clinics in 2017 (two in May, one in October). A total of 59 people received vaccinations. The county has also provided the corps with two hand-washing stations for any passersby to use.

“We are definitely doing our part in the fight against the hepatitis A outbreak through attention to hygiene, maintaining a clean and sanitary facility, promoting the importance of frequent and thorough hand-washing, as well as continuing to provide opportunities to get vaccinated,” said Captain Monica Covert, Centre City Corps Officer.

Being that the corps’ holiday meals often draw people who live on the streets or in motels or single room occupancies downtown, The Salvation Army has requested more hand-washing stations and is considering holding another vaccination clinic around the holidays.

To educate its staff and clients, the corps is conducting monthly trainings for staff and volunteers, which include education on hepatitis A infection prevention and control. That information then gets passed on to clients.

The Salvation Army has also teamed up with the local police department as part of the Homeless Outreach Team, a group of police officers and county health officials that engages the homeless population and helps connect them to relevant services.

Paul Armstrong is an intern for The Salvation Army, pursuing his master’s degree in social work at the University of Southern California. He works with the Homeless Outreach Team on educating the homeless community about hepatitis A and strategies for curbing the outbreak. Every Thursday morning, the team conducts a coordinated outreach event.

Based on these outings, Armstrong has noticed the community is pretty evenly split into two camps: those who say they need a vaccine or already have it, and those who are resistant. While it’s difficult to confirm, partially because hepatitis A has a 50-day incubation period, county officials have asserted the rate of infection seems to be slowing.

“It has seemed like people are aware, handwashing stations are getting utilized, so it feels like the strategy is working but time will tell,” Armstrong said.

Yet, Covert and others working on the frontlines aren’t calling it a success just yet.

“Although efforts, education and awareness are being promoted, the fact that the hepatitis A outbreak continues to thrive is unsettling to all of us,” Covert said. “We serve a transient population with a rapid turnover. The homeless community that we serve is always changing and new individuals come through our doors who have not been vaccinated pose a new risk.”

According to the Centers for Disease Control and Prevention, hepatitis A is a vaccine-preventable viral infection that affects the liver, causing inflammation. Symptoms of hepatitis A are usually acute and will resolve without treatment, but the disease can become deadly. Although transmission can occur through contact with fecal matter, sexual intercourse, or sharing needles with an infected person, most cases are from foodborne illnesses, Carr said.

“When the case is foodborne, it can be isolated,” she said. “But this outbreak is the first that we’ve seen of this magnitude.”

The outbreak can, at least in part, be traced back to homelessness and the lack of affordable housing in San Diego County. The San Diego Union Tribune reported that the city saw the third highest increase in home prices of all U.S. cities in the nation in 2017. The city of San Diego’s population is about 1.4 million, as of July 2016, according to the Census Bureau. Its homeless population is 5,619 in 2017 according to the RTFH.

“Our homeless problem is so severe in San Diego,” Carr said. “People who are living in makeshift tents—you’d have a lot of people sharing stuff.”

A lack of public bathrooms has also exacerbated the issue. At one point, the city set up bathrooms throughout the city but they became unmanageable because of destruction or the amount of drug use, so the city shut them down. That, according to Carr, helped lay the groundwork for the outbreak.

“The bottom line,” Carr said, “is that there is not enough shelter, even at The Salvation Army. We maintain a waitlist of 10 people. There’s never a night where there are empty beds.”