Paul Crowley is not your average Pepperdine University student. He’s 61, part of an exclusive 20-student population attending Pepperdine’s Palmer Center Micro-Enterprise Program and he commutes to school from The Salvation Army Haven homeless shelter. Like all of his peers, he’s homeless, and like many of them, he’s also a veteran. 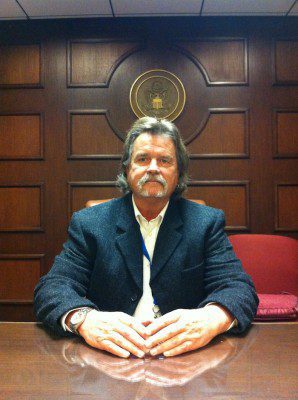 He’s the embodiment of The Salvation Army’s dedication to veterans, which takes many shapes and forms, including helping them secure gainful employment. From that commitment, a collaboration with Pepperdine was born to teach homeless veterans wanting to restart their lives entrepreneurism from the ground up. The Palmer Center Micro-Enterprise Program—in its first official year after several pilots—teaches “Entrepreneurs-in-Training” how to evolve from dependence to independence to interdependence.

Crowley applies the same dedication and perseverance to his current studies that he demonstrated in his three years of service as a paratrooper in the 82nd Airborne in the 70s. Just like the Army, he had to go through a rigorous application process and in-person interview to enter the Pepperdine program. After completing 12 weeks of class focusing on personal skills, he had to prove himself once again during the second round of cuts. Only those who can demonstrate their proposed business model is viable move on to the second session, concentrating on building a solid business plan.

Entrepreneurs-in-Training are encouraged to draw from their own experience, knowing it will take personal passion to meet the challenges of small business ownership. Crowley’s distinct point of view allowed him to see the need among veterans for certain supportive services, and led to his idea for a nonprofit organization—“Suit Up Vets”—that provides homeless veterans with suits or other appropriate work clothes to help them gain the confidence to jump back into the job market.

“These guys are running around with holes in their pants, dirty shirts…filthy. If they come in tattered and torn, they’re not going to get the job,” Crowley said. “But once they start getting some new stuff, it makes them feel better about themselves. It’s all about self-esteem. They come in so low and it’s about trying to bring them back up.”

He’s had many mentors along the way.

Each student is paired with three “Champions”—graduate students pooled from Pepperdine’s law and business school. Distinguished professors rotate as guest speakers. Program coordinators such as Vanda Collins begin class by reciting inspiring Scripture: “For I know the plans I have for you,” declares the LORD, “plans to prosper you and not to harm you, plans to give you hope and a future” (Jer. 29:11 NIV).

Even the barber across the street from Crowley’s residence at The Salvation Army’s Haven shelter has inspired Crowley. “Dreamer,” as he is known, gives about 200 free haircuts a month.

“Guys will come in just off the streets. He welcomes them in, gives them some assurance that everything’s going to work out. He makes them look nice,” Crowley said. “And the guy walks out almost feeling like a new man…with a whole different attitude than he had when he walked in.”

Of course fresh haircuts and a new suit are just one piece of the puzzle. Crowley credits The Salvation Army’s comprehensive program and shelter with rebuilding his life. “This is the best put together program I’ve seen,” he said. “It’s not high pressure. There’s accountability and structure, but it’s anchored by a sense of respect and dignity, which is important to me. It’s therapeutic.”

Crowley reminisces about the time he entered the program. He’d lost everything to alcoholism and had destroyed his family relationships, business relationships, everything. “I was a mess,” he said. “And felt that way—completely felt torn down.”

But then he moved into The Salvation Army’s Haven. With food in his stomach, new clothing and a haircut, Crowley started feeling better about himself. When he first transitioned out of homelessness, he said, he wouldn’t have thought he deserved the opportunity to go to college to learn how to start his own company. But with the help of the Haven staff offering encouragement, assisting with the application process, and giving mock interviews, he said he regained self-esteem.

“I had lost all faith in myself,” Crowley said. “But I started to hold my head up higher. I started to think, you know what? I can do this.”

As Crowley now fine-tunes Suit Up Vets—to be virtual and mobile—his future is hopeful. He won’t wait for the economy to improve so he can land his dream job; Paul Crowley understands his future is now.

Washing from inside out

Like Crowley, Mike Slaughter—a 55-year-old veteran who served 11 years in the U.S. Marines—is well on the road to self-sufficiency as a resident of The Salvation Army’s Haven homeless shelter and Entrepreneur-in-Training in the Pepperdine Palmer Center Micro-Enterprise Program. 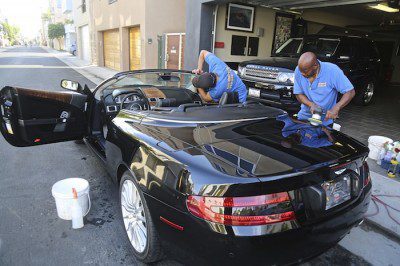 Not many entrepreneurs can say their small business has grown 1,000 percent since moving into a homeless shelter, but that’s exactly what Slaughter’s ledger shows. What started out as a $600 investment for a buffer, cleaning supplies and an extension cord, has turned into a thriving mobile car wash business boasting 40 accounts and—in a city where you are what you drive—unlimited potential for “cleaning up” in the car washing market. His business is a high-end operation, only dealing with well-maintained vehicles with accounts in Bel Air, Beverly Hills, Brentwood, Santa Monica and Malibu, including a freshly inked contract with Latitude 33, a high-end condo in Marina del Rey.

But just one year ago, from behind prison bars serving 12 months for drug possession, Slaughter’s future seemed bleak. “I knew how hard it would be to get a job; especially guys with felony criminal records like me,” Slaughter said. “But that felony criminal background propelled me forward in my business.”

The humble beginnings of washing his friends’ cars for spending cash soon expanded into buffing out the fenders of BMWs and Mercedes in some of the most affluent communities in L.A. His prices start out at $25 for sedans and $35 for SUVs, with rates exceeding $100 for more intense detailing jobs. His business washes cars “from the inside out”—a concept that hits closer to home since coming to The Salvation Army.

“I’ve had to humble myself, and learn how to take direction,” Slaughter said.

At The Salvation Army Haven, funded by government grants and generous individual and corporate donors, the program is designed especially for veterans and the myriad struggles they face. It helps veterans tackle obstacles to self-sufficiency—whether that’s through substance abuse treatment, emergency short-term housing, mental illness, or needs particular to senior citizens or women.

“I have a strong network here; they’re totally supportive,” Slaughter said. “They took me in and they help me all the way.”

One-on-one sessions with his mentor and group therapy have not only helped him professionally, but personally too. “I’ve discovered what’s easy to do—to not fight,” he said. “Ego…imposing your will on others…tends to separate you from others.”

This humility and willingness to do the hard work led to Slaughter’s admittance to the Pepperdine program. When he first entered, he already had the basic business model for his mobile car wash mapped out. But his Pepperdine mentors have been instrumental in tweaking it, like suggesting a name change for the business from “This is It” to a more marketable “Platinum Shine Mobile Auto Wash & Detail.”

He was also encouraged to leverage his van as a marketing tool. Now, with his new business name and phone number clearly printed on the side, his van doubles as a mobile billboard and has already brought in business. Pepperdine mentors also gave him the tools to manage staff, including how to properly file taxes. He now has one employee—a remarkable feat considering the high unemployment rates and broader economic conditions facing California business owners and out-of-work Angelinos alike who do not share Slaughter’s troubled past.

But it’s not all smooth sailing. Just six months into his residency at The Salvation Army, Slaughter discovered he had prostate cancer. It was treatable, but he’d undergo radiation Monday through Friday for seven weeks. He was only halfway through his program at The Salvation Army, and had just submitted his application to Pepperdine. He had every excuse to quit, or at least, delay his plans. But instead, it pushed him to work harder.

Slaughter makes it clear his success is because of perseverance and dedication, the kind of commitment that requires a 55-year-old homeless man to wash dozens of cars in triple-digit heat, after spending the morning undergoing radiation treatment.

“You do what you’ve got to do,” Slaughter said.

He is eager to help others, especially veterans with criminal pasts like himself, to see their potential and even start companies of their own.

As his business rises and he soon faces graduation from The Salvation Army, Slaughter thinks about the future. He wants to invest in other small business owners’ dreams and already has his sights on a friend’s business, a local L.A.-based baker behind Crumb Cups, a desserts bakery that’s currently perfecting its marketing and packaging in hopes of distributing through retail powerhouse Costco.

When reflecting on his criminal and homeless past, he can’t quite bring himself to say, “no regrets” but even so, he remains remarkably positive.

“I regret my nonproductive years, but choose to stay on the gratitude side,” he said. “I am grateful for what I have now.”

Between the support Paul Crowley and Mike Slaughter receive at The Salvation Army’s Haven shelter for veterans, and all of the open doors Pepperdine’s Palmer Center Micro-Enterprise Program provides, their futures could be summed up in the motto of the 82nd Airborne…“All the Way!”

But they’re not the only ones with bright futures. Their new lease on life is contagious and both men are determined to infuse their peers with the confidence and tools to follow their own passions. It may look like a tailored, pinstriped suit to help a veteran nail that next job interview or a bucket of soapy water and a sponge for a veteran starting his own business. Either way, Crowley and Slaughter will be there to say, “If I can do this, you can do this. I believe in you.”

Dawn Wright is the director of marketing and communications in the Southern California Division.