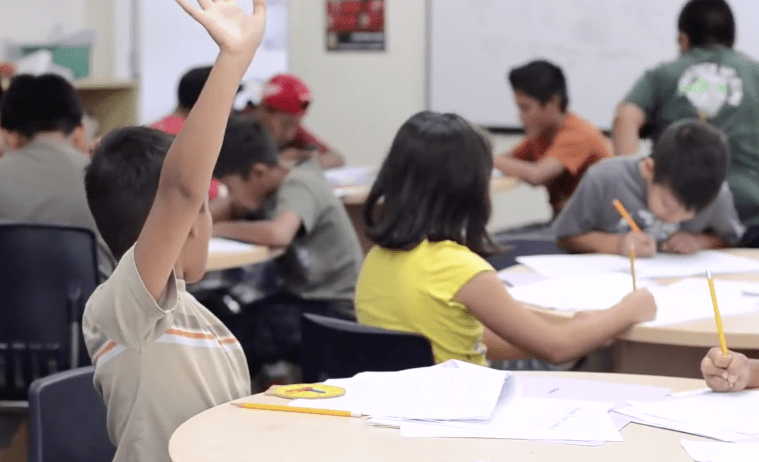 Even after he dropped out of high school, Edwin Escobar still found ways to channel his inner-Banksy, a UK-based graffiti artist.

Unfortunately, none of them were legal.

He’d run the streets with his crew, as he recalled, stealing paint, tagging up South Central LA walls––the city his canvas, he its enigmatic delinquent.

But these cheap thrills, as it turned out, were short-lived. This wasn’t the life he wanted.

Escobar found his way into the Los Angeles Reconnections Career Academy (LARCA), a GED certification and vocational job training program for youth and young adults ages 16-24. Through LARCA, which operates under the guidance of the Youth Policy Institute (YPI) in Los Angeles and the San Fernando Valley, students can earn General Education Diploma (GED) certification or a diploma from the School for Integrated Academics (SIA) and Technologies or an SIA Tech Charter High School. By the end of 2014, 94 students are expected to complete this year’s program.

“Our primary goal is to re-engage youth that have been disconnected and disenfranchised and put them back on track with their education and career goals,” said Angela Rubalcava, assistant director for the YouthSource and Education Department, who helps administer the program. Escobar, now 21, is pursuing his GED and a career in graphic design.

“I want to be an artist and paint but this time with people’s permission,” he said. “I’m motivated and I want to turn my life around.”

When students enter the program, they are interviewed by a caseworker and placed at the appropriate level in math and language arts. If necessary, they will receive one-on-one tutoring. They attend classes for eight hours and work a job during the rest of the week. They also learn public speaking, networking, creating PowerPoint presentations, time management, how to write an email, and even how to make a phone call.

“We customize classes and see the students as ‘at promise’ rather than ‘at risk,’” said Dr. Jake Gordon, SIA Tech principal.

Vocational job training programs include solar energy construction, a security guard certificate, along with a CPR card and Early Childhood Education Training. One of the main goals is to meet the students where they are and accelerate them two grade levels within a 12-month period. Brittany Green, 22, is an SIA tech student who enrolled in LARCA to get her high school diploma.

“In my old high school I didn’t pass the math test because I didn’t understand fractions and I was also missing an English class. I understand and learned fractions and new math skills. Now, I help other students and tutor them in Math,” she said. “My mom always said that education is important and my dream is to be a writer or lawyer someday. I gave myself a pity party but realized that this was my last opportunity––and now I’m happy to be graduating this June.”

An on-site mental health professional conducts one-on-one counseling on a weekly basis for students with learning disabilities or suffering from psychological trauma due to violence or substance abuse in their homes. Other students are referred to LA City and County social services like the Gang Education Youth Development, Job Corps placement and other vocational programs. For students unable to attend school because they have childcare needs, the facility also offers a Young Parents Daycare, along with a parenting skills class. Students can even earn stipends and bus tokens for an added boost.

Alex Serna, a UCLA graduate and credentialed teacher, is the academic program coordinator. He believes that endemic poverty is a historical cycle. Some students he speaks with don’t even know what college is. One of Serna’s students even reported that a high school counselor said, “You’re going to probably be dead before the age of 18.”

DO GOOD
– Read the White House fact sheet on the Promise Zones Initiative at bit.ly/promisezonesfacts.

– Become an adult literacy or GED tutor at volunteermatch.org.

“Public schools are overpopulated and may not have enough resources,” Serna said. “There’s a whole gamut of obstacles to overcome. Everyday I’m inspired by the students, seeing them transform their lives. It is probably one of the most powerful experiences I have as a teacher.”

Serna believes that the students become more engaged when there is cultural relevancy in what and how they learn. Escobar, for instance, drew inspiration from the rich history of the murals of Maravilla handball court in East LA, which sparked interest about his own culture. With a son on the way, Escobar is turning his attention to bigger matters, but one thing hasn’t changed: he’s still a student of Banksy’s work.

“I want to help support my baby’s mama and my son; I don’t want to break the law or do crazy things like getting arrested,” he said. “[Banksy] writes sayings like ‘open your eyes.’ So, now I sign my name and write little sayings like ‘do your thing’ or ‘don’t let anyone stop you.’ I’m focusing on the positive aspects of life.”

In addition to the five communities initially designated, the Obama Administration will identify 15 more over the next three years. Each Promise Zone must determine a set of outcomes they will pursue to revitalize their communities, develop a strategy supporting those outcomes and realign resources accordingly.

Los Angeles is one of the five initial Promise Zones, managed through Youth Policy Institute (YPI) that also runs the Los Angeles Reconnections Career Academy (LARCA). The other zones are in San Antonio, Philadelphia, Southeastern Kentucky, and the Choctaw Nation of Oklahoma.