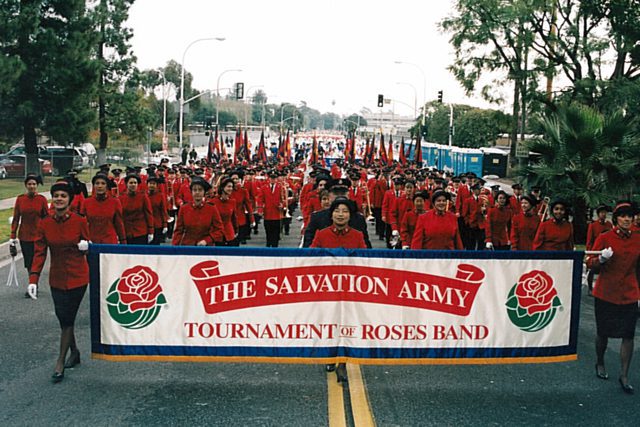 The Salvation Army will march in the Tournament of Roses Parade for the 96th year while celebrating its own 150th anniversary.

On Jan. 1, 1920, a brass band of The Salvation Army, led by Bandmaster Harold Gooding, took the stage and set forth a legacy that has lived on for over 8 decades.

In 2015, The Salvation Army will march for the 96th time in the 126th Rose Parade, hosted by The Tournament of Roses in Pasadena, Calif.

Flinn has been involved with the Tournament of Roses for over 30 years. As a fourth generation Salvationist, he has witnessed The Salvation Army’s involvement in the Rose Parade and is well versed in its history.

In 1920, Gooding, bandmaster of the Los Angeles Citadel Band, had the idea to contact The Tournament of Roses.

“Harold Gooding was the one,” Flinn said. “Along with some other folks in the band, Harold was the one who made contact with The Tournament of Roses and asked if they could be considered to be one of the units in the parade.”

Gooding considered marching in the Rose Parade because marching outdoors came naturally to The Salvation Army.

“He probably never realized that he was putting in motion this long of a tradition,” Flinn said.

A tradition is exactly what Gooding set forth. The Salvation Army has become the longest continuing marching band performing in the Tournament of Roses Parade.

“No band has more years of involvement in the Rose Parade,” Flinn said. “There are a number of floats that have more years, over 100 years involvement, but no other band that has consistently marched over the decades.”

In its first year marching in the Rose Parade, The Salvation Army band consisted of approximately 40 members. This year, however, the band will be comprised of nearly 230 members including band alumni and bandsmen from across the nation.

In order to prepare for the parade, The Salvation Army will hold a music camp during the week leading up to the event.

“The members who will make up the marching band are all musicians in their own territories and corps, so the music camp will be a learning environment,” Riley said. “We will invite their bandmasters to come teach, practice and have fun with all the different groups coming in.”

The band will come together once more following the parade to perform in a united concert.

“The music that we play represents our faith and our beliefs,” Riley said. “We play a lot of Salvation Army music along with patriotic songs, Christian songs, ‘Amazing Grace,’ ‘My Country, ‘Tis of Thee,’ all of these kinds of songs that represent the Army.”

This year, Divisional Music Director Kevin Larsson will lead the band on its march down the parade route.

“Harry Sparks, who marched with the band for 65 years, holds the record for marching the most consecutive years,” Riley said. “ We have multiple generations marching with us along with whole families. It’s a thrill.”

The tradition of marching is important to the Army, Riley said, because it provides an opportunity to be recognized internationally.

“On that day we represent The Salvation Army internationally,” Riley said. “I believe that is an important thing to see and I believe it is critical to stay out in the public eye and help the Army be recognized for the services it provides throughout the world.”

“As soon as they see the Army band come marching down the street, it represents The Salvation Army’s work worldwide,” Riley said. “People are clapping and singing along with the music; it’s just a wonderful feeling.”