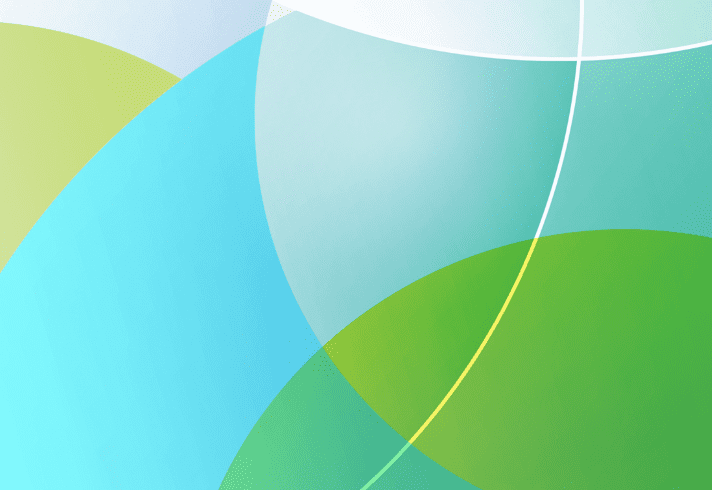 Accountability Movement: A ‘Journey of Renewal’

How is the worldwide initiative to deliver a Salvation Army ‘fit for purpose’ doing?

“Where are you going?” This is a key question facing all organizations in today’s climate of rapid technological and social change. It is particularly key for organizations born in another era that struggle with how to present themselves and how to articulate their identity in this brave new world, or whose systems of governance and accountability have fallen behind the new standards of transparency, holistic stewardship, equality and open collaboration.

President John F. Kennedy prophesied into this reality when he said more than 50 years ago on the eve of what we now know as the digital revolution: “Change is the law of life. And those who look only to the past or present are certain to miss the future.”

The Salvation Army, with the long-term viability of its worldwide mission at heart, is one organization that is facing the challenges head-on. Since its launch in 2016, the Accountability Movement has been a self-proclaimed “Journey of Renewal” for The Salvation Army with all aspects of the Army’s spiritual and missional life under the microscope of accountability and all personnel called to participate.

“The great hope of Journey of Renewal is that across the world, in every place, The Salvation Army will be engulfed by a new vitality in the experience and expression of its faith, and fresh energy to serve the world,” said Commissioner Robert Donaldson, International Secretary for Governance and Accountability. “We envision a new level of passion and heightened awareness—globally and locally—to share the transforming love of God in Jesus, eliminate poverty, safeguard the vulnerable, and ensure contemporary best practice in all our systems and processes.”

“‘Where are you going?’ has been a key question for us and one of the key focuses of our journey has been the stewardship of resources,” said Australia National Commander Commissioner Floyd Tidd. “We looked at the duplication of resources through the existence of two independent administrations in Australia, and, after extensive consultation, realized that we could no longer continue as we were and be up front with Australians that we are stewarding our organization in the best way possible.”

Yet the movement is meant not only for administrations, but for everyone linked to The Salvation Army, from soldier to board member to volunteer. To aid in its spread, 15,000 copies of a resource book were distributed across the world in 16 languages.

“We can see an increasing understanding among our people about the need for accountability in all areas,” said Colonel Magna Nielsen, Territorial Leader in the Eastern Europe Territory, which used the movement as the basis for its Territorial Mission Strategy through 2020. The territory has also held seminars about how corps can embark on the “Journey of Renewal.” 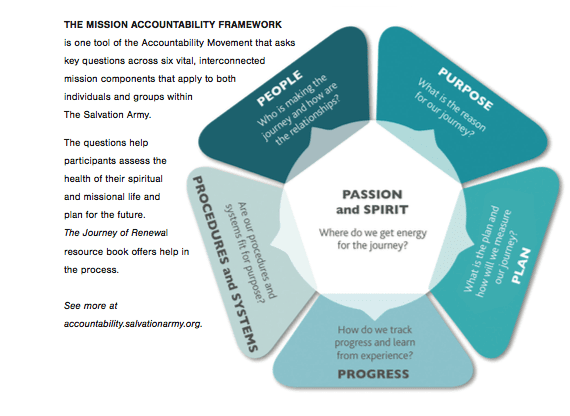 ‘Holiness unto the Lord’

To date, 38 territories, commands and regions—of 62 worldwide—have started their journey of renewal. This journey, notably, arises as much out of the Army’s foundational “holiness” focus as it does out of the universal need to adapt to the technological and sociological realities of the 21st century.

In effect, through the journey of renewal, the Army is saying that anything less than a thorough refit of its mission, renewal of its spiritual passion and upgrade in how it resources both its faith and its mission would be a failure in stewardship and therefore a serious breach of its holiness tradition.

“How could we continue to uphold the scriptural imperative ‘holiness unto the Lord’ if our own house was unfit to meet the needs of the hour?” Donaldson asked. “Or if the Army itself was unwilling to adapt its methods or open its heart to a fresh vision and passion for operating in the very different world of the 2010s? Or if we acquiesced to pluralism and commercialism, or failed to update our systems and became an incompetent Salvation Army, or became a proud Salvation Army in an age that values humility above all other qualities?”

Pointing to 2 Timothy 3:16-17, Colonel Lee Graves, Chief Secretary of the Canada and Bermuda Territory, noted that we need to be accountable first to God through his Word. “Scripture is inspired by God; it teaches us what is true and helps correct what is wrong in our lives,” he said. “Our mission is the gospel of transformation and the biblical text holds us accountable.”

Then, he said, we need to be accountable to each other, which begins between the territorial commander and the chief secretary. “We need to model it at the highest level,” Graves said. “My hope is that it reverberates through the ranks so that leadership at every level is an example of accountability.”

For organizations to thrive, let alone survive, amid unrelenting change, there must be a willingness to refocus the core business and make hard decisions.

Paper company Kimberly-Clark, for example, fell behind the general market by 36 percent by 1971. It began making tough decisions about its future, starting with a revamp of its leadership team and the appointment of a new CEO. Within 20 years, cumulative stock returns lifted to 4.1 times greater than those of the general market.

At one point, the company made the highly controversial decision to move out of the coated paper business, sell all its mills, and invest heavily in the consumer paper products business in brands like Huggies diapers and Kleenex tissues. Today Kimberly-Clark and its global brands, with world headquarters in Dallas, reach 1.3 billion people across 178 countries every day.

“The membership statistics of our movement are not crash hot at the moment, particularly those of Western territories,” Donaldson acknowledged. “But if it is possible for a declining paper company to re-create itself for the future and then go on to lead the world in providing solutions to people’s health, hygiene and well-being needs, why can’t an old oak of the Church transform itself from the inside out?

“’We have a Gospel that matches the hour’ wrote John Gowans in his well-known song. The central thrust of our journey of renewal is that we believe this with all our heart and will not hold back on doing everything necessary to make it a living, transforming reality in the villages, towns and cities of our world,” Donaldson said.

We must, he said, let go of any reluctance to admit our need for change, our need for help to take the journey, or our deeper need to humble ourselves before God. 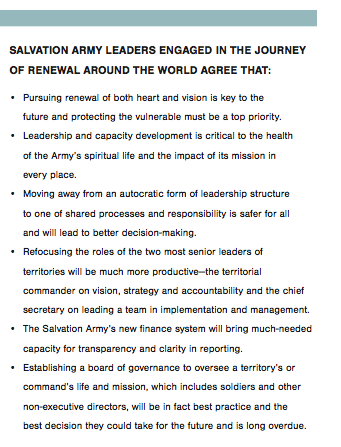 Where The Salvation Army has stepped into the journey of renewal, there is evidence of positive transformation, fresh vision and reenergized mission.

Africa is shaping up to be the “first adopter zone” of the Accountability Movement.

In the Kenya East Territory, for example, a territorial executive team of 70 members is leading renewal, representing more than 85,000 soldiers, 79,000 junior soldiers, nearly 700 corps and outposts, and 372 schools.

“The governance logistics are huge,” said Major Seth Le Leu, Principal Advisor for International Governance. “The executive team is engaged in deep and lively discussion on the key governance principles. More than anything else, the team really appreciated that governance change is for all levels of the organization.”

Commissioner Alistair Herring, also Principal Advisor for International Governance, said that even though territories are signing up for renewal and accountability, it is only as the Journey of Renewal comes to a territory that its necessity becomes obvious. “The lights go on for many people about the connections between the theology of accountability and how changes in structures and systems will facilitate a journey of renewal—the development of a Christlike culture,” he said.

The Governance and Accountability team anticipates that by September at least 12 territories will have new governance charters and boards in place and within 18 months the figure will be well above 30. In some countries, such as India where there are six territories and Kenya where there are two, strong collaboration between the territories has been evident as they have considered the complexity of governance structure development under one legal registration.

For an organization the size of The Salvation Army, some of the changes involved in the Journey of Renewal are monumental and, in some cases, mean that 150-year-old practices will disappear. The consultative process has been the most extensive undertaken in its history.

As the movement takes hold, there’s a new confidence beginning to show in the stride of The Salvation Army as, around the world, it musters the courage to boldly go where it has not gone before; to shed the old wineskins for the new. The bottom line is still “the whole world redeeming,” to use the Founder’s own words. But one gets the feeling that right now for this globe-treading movement of God, transformation starts at home and a more humble, more formidable Salvation Army is about to emerge.