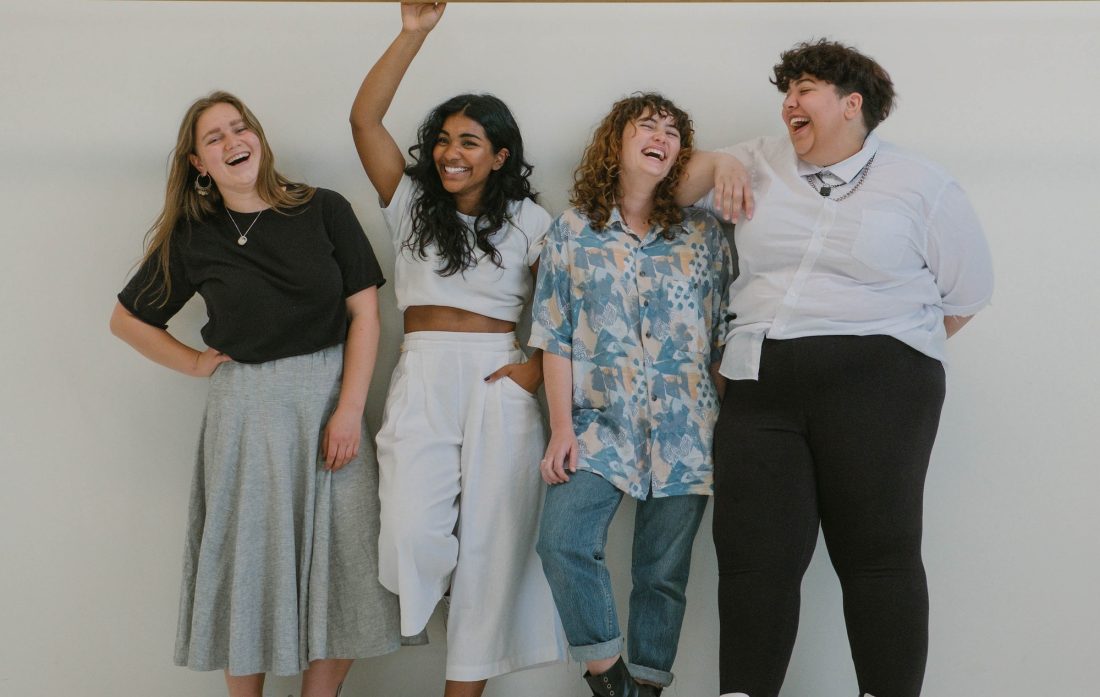 I don’t know about you, but I feel like we’ve been told a whole lot of lies and tall tales about friendship, and I think I fell for most of them. For a lot of my life, I lived by that book of “truths” that turned out to actually be a book of lies (brought to you by insecurity, teenage movies and bad advice). I’m gullible. I have fallen for a lot of harmful lies, ones that threatened to truly destroy me—and I’m not just talking about that brief period in my early twenties where I believed wearing gaucho pants with sparkles was a good idea. I’m talking about lies that kept me imprisoned and stuck. Lies that kept me isolated and alone. Lies that sucked the life right out of me.

A lot of the lies I believed most definitely were. Now that I know the truth, I want to sing it from the rooftops. If you have believed any of these lies or still live under them, let’s kick them to the curb one by one.

We often wait for friends to just show up in our lives—kinda like a rom com, but for pals: Girl is just doing her thing; everyone else has friends except for her; she is so sad and does not know what to do; she walks in the mall and collides with the most perfect potential friend ever; potential friend picks up her shopping bags; and when their eyes connect, they realize this is fate. They go straight to Cinnabon and discover in two minutes of conversation that they both love caramel lattes and long walks in Target; they exchange Insta handles and vow to watch The Great British Baking Show together; and they live happily ever after. The end.

The thing is, friendship rarely goes like that. We often have to be intentional and pursue the friendships for which we are looking.

This narrative that it just “happens” takes the power right out of your hands and gives it to an invisible force. The truth is, you have the power. Maybe you’re waiting for someone to notice you, but so is everyone else.

It’s time to take the power back.

Lie #2: Friendship is an extra, not a necessity

We’ve treated friendship like a luxury for far too long. Friendship isn’t a luxury; it’s essential. We need people. We need connection. We need to belong. It even affects our life expectancy. In my opinion, that means we don’t wait to invest in it “when we have time”; it means we invest in it now because it’s a really, really big deal. I think subconsciously we have friendship far down our mental checklists. It needs to be near the top—not lost after busy schedules, soccer practice and chores. Those things are important, but they’re not more important than having close connections in your life.

We don’t just want it; we actually need it.

Lie #3: Friends should understand when you go MIA

This lie also applies to when you never text back, never show up or are too busy to get together. I see memes all the time that say things like, “You have to understand I might not ever text you back, but I still love you” or “I want to be invited—I just won’t ever come.” I get it; life is crazy, and there are real things that keep us from being able to be there sometimes. I’ve had seasons of dark postpartum depression when I was completely unable to pursue my friendships. There are all kinds of things that can come up like that, and if that’s where you’re at, this is not for you.

The thing is, being a bad friend can be situational, but we shouldn’t turn it into a lifestyle. At that point, it’s just an excuse. Good friendships take intentionality; you can’t ignore them and expect them to be healthy. You can’t cancel last minute, can’t never text back, and you can’t be a bad friend and expect to have good friendships. You just can’t. You can’t take and take and take. You can’t treat people like you don’t value them and then expect them to value you. It’s just not the way it works. If you’re always too busy for your friends, you will have shallow friendships.

Being an absent friend and having good friendships isn’t a thing.

Lie #4: You’re the only one without good friends

Listen, I know it can feel that way, and it’s true some people have amazing friendships. But let’s set the record straight about “everyone.” Three in five Americans report being lonely. That’s more than half, and that’s definitely not everyone. Even if someone is currently connected, I would bet my right leg that they’ve felt like an outsider at some point in their life. I’d bet that they’ve felt that sickening pang of loneliness just like you have. In fact, I wrote a whole book on friendship, “I’ll Be There (But I’ll Be Wearing Sweatpants)” because friendship has been the source of some of my highest highs, but also my lowest low.

You are not alone. You’re not the only one (read and reread). We are in fact on this journey together, so let’s link arms and do this thing. A better future awaits.

Jess Johnston lives in Southern California with her husband and four kids who are the loves of her life. Her favorite thing to do is to sit around a table with her best friends, eating nachos and laughing until her stomach hurts. She is the co-author of “I’ll Be There (But I’ll Be Wearing Sweatpants).” She has been a top contributor to publications such as HuffPo, Scary Mommy, and Motherly, and has been honored with Motherly‘s Writer of the Year Award.