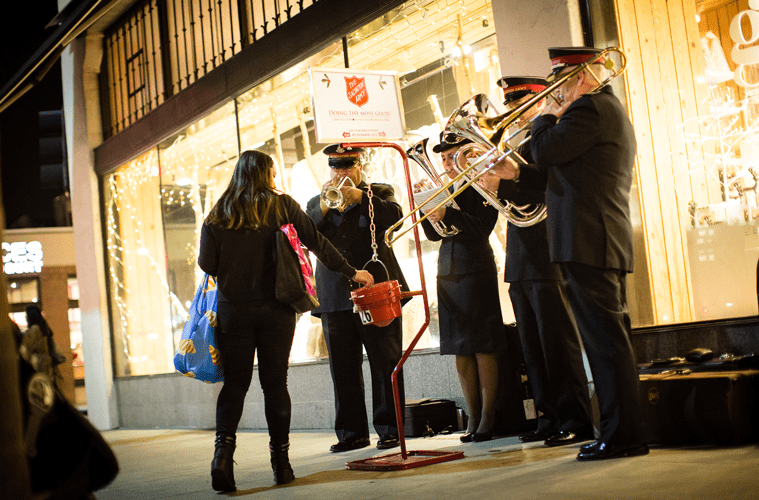 12 Things you might not know about The Salvation Army

1. The Salvation Army was founded in London, England, in 1865 by former Methodist minister William Booth. Booth abandoned the conventional concept of a church and a pulpit, instead taking his message of spiritual salvation directly to the people – in particular, the homeless, the hungry, and the destitute of Victorian-era London.

2. The Salvation Army is often credited with popularizing the donut in the United States. After it served donuts to U.S. troops in the field during World War I, many soldiers came back to the States hooked on the pastries. Donut consumption subsequently took off in the U.S. during the 1920s and 1930s. In 1938, The Salvation Army created National Donut Day, observed the first Friday of June, to honor the female Salvation Army officers – or “donut lassies” – who served the troops during the war.

3. The annual Red Kettle campaign began in 1891 in San Francisco when Salvation Army Captain Joseph McFee set up a crab pot at Oakland Ferry Landing to collect money to feed 1,000 of the poor on Christmas Day. Captain McFee encouraged passersby to drop coins in the pot to help the poor. Thus, the idea for the red kettles was born.

4. Red kettle volunteers didn’t become bell ringers until 1900, when a young cadet named Amelia from New York City bought a 10-cent bell to ring. The bell was a huge success and drew attention and donations from those who passed. Not long after, all the cadets had bells to ring.

5. Now in its 128th year, the Red Kettle campaign is one of the longest-running, most recognizable fundraising efforts in the world. Kettles are now used worldwide and can be found in South Korea, Japan, Chile, and throughout Europe.

6. For the 2018 Red Kettle campaign, The Salvation Army is continuing to encourage Americans to join The Salvation Army’s #FightForGood by donating online or in person at the kettles. People can visit give.salvationarmyusa.org to donate directly to a need The Salvation Army addresses, such as hunger, shelter, or holiday assistance.

7. Every year, about 25,000 bell ringers, young and old, brave the elements to help The Salvation Army raise money for local community programs. Year after year, mystery donations are dropped into the kettles ranging from gold coins and diamonds to large cash donations and even wedding rings.

8. Since 1997, The Salvation Army has partnered with the Dallas Cowboys to launch the Red Kettle campaign during halftime of the team’s Thanksgiving Day game. This year, Meghan Trainor will kick off the season and join a list of other distinguished performers such as Thomas Rhett, Luke Bryan, Selena Gomez, Kenny Chesney, Keith Urban, the Jonas Brothers, Kelly Clarkson, Toby Keith, and Jessica Simpson. Throughout the 21-year partnership, The Salvation Army has raised more than $2.4 billion in the kettles to support service efforts in communities nationwide.

9. In 2015, The Salvation Army partnered with the Indiana University Lilly Family School of Philanthropy to launch the Human Needs Index (HumanNeedsIndex.org), a new approach to understanding poverty in the U.S. that draws on The Salvation Army’s rich collection of service-related data. Unlike traditional measures of poverty, the HNI comprises indicators that represent need substantiated on consumption rather than income. Thus, the HNI’s greatest strength is that it illustrates a more intimate portrayal of need than any other index.

10. National Salvation Army Week, typically observed the second week in May, was first declared by President Dwight D. Eisenhower in 1954. In his proclamation, Eisenhower noted: “Among Americans, The Salvation Army has long been a symbol of wholehearted dedication to the cause of human brotherhood…Their work has been a constant reminder to us all that each of us is neighbor and kin to all Americans. Giving freely of themselves, the men and women of The Salvation Army have won the respect of us all.”

11. The Salvation Army has been responding during and after natural disasters since 1900. The Salvation Army responded to hurricanes Harvey, Irma, and Maria in 2017 and continues serving in recovery of what has officially become the costliest and one of the most catastrophic hurricane seasons in the history of the United States.

12. In 2005, consulting firm Booz Allen Hamilton selected The Salvation Army – along with the Rolling Stones, Oxford University, and the Olympic Games – as among the world’s top ten enduring institutions.