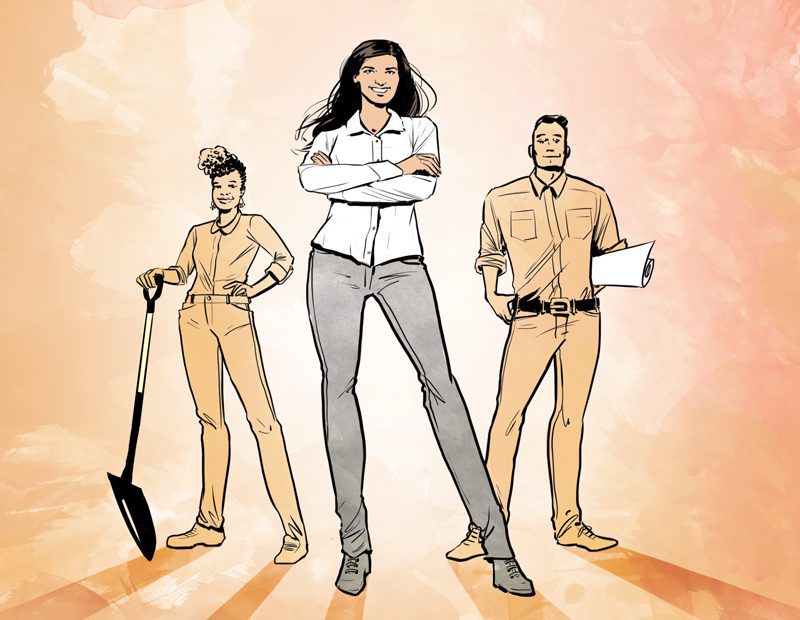 Work to make a life (not just a living)

Mackenzie Neitling spends her days attending construction meetings and drawing plans as a designer for Mackenzie, a multi-disciplinary architecture and engineering design firm in Portland. She gathered a group of young professionals to contribute to The Salvation Army’s work through volunteerism, fundraising and outreach as a part of Echelon, which now has six chapters across the country. | Photo by Marissa Neitling

Native to a city known for valuing individuality and outside-the-box thinking, Neitling plots tenant spaces for corporate office buildings as a designer for Mackenzie, a multi-disciplinary architecture and engineering design firm. Just as this 27-year-old graduate of the University of Oregon works to reimagine workspaces for a younger labor force, she has also taken a creative approach to involving young professionals in The Salvation Army.

She called it the Emerging Leaders Council and served as its first chairperson for two years. Neitling now remains on the council as a member and serves on the Portland Metro Advisory Board. Across the U.S., 18,919 people serve on advisory boards for The Salvation Army.

“We realized early on that our generation wasn’t going to be able to do much with the fundraising component, as a lot of us are working on getting ourselves established and don’t have a lot of extra cash in our pockets,” she said. “But to have an opportunity for young professionals to utilize their skills, passions and the ability to gather groups together to spread the word is something that young people can offer to The Salvation Army. We can’t bid a bunch of money at an auction, but we can get together, get our hands dirty and help out.”

The group first focused on projects at a Portland Salvation shelter for domestic violence victims, creating a website, cooking breakfast for residents and taking the kids shopping for school supplies. It also helped showcase the program in the Willamette Week annual Give Guide, which resulted in fundraising throughout the Portland area.

While it is too soon to say whether Neitling’s skills-based service initiative for young professionals is part of a broader national trend, a number of indicators suggest Millennials may be poised to reverse a decade-long decline in rates of volunteering.

For example, LinkedIn opened an online volunteer marketplace in early 2014 to connect young professionals with nonprofits that can benefit from their skills and expertise. The platform partners with organizations—Catchafire, Taproot Foundation, BoardSource and VolunteerMatch—who similarly aim to pair the social service sector with skilled professionals on a global scale.

As of February, over 10 million professionals had added the Volunteer Experience and Causes section to their LinkedIn profiles. Roughly 4.5 million of these professionals are in the U.S., where there are approximately 1.5 million nonprofits—meaning an average of three professionals could help every nonprofit in the country. In addition, more than 4 million members have gone a step further by signaling that they are interested in skilled volunteer work or joining a nonprofit board.

“A generation ago, most professionals did not begin to think about ‘making an impact’ until the sunset of their careers,” said Meg Garlinghouse, Head of LinkedIn for Good. “Now—at the sunrise of their careers and mostly driven by Millennials—young professionals are insisting that they integrate purpose into the workplace. It’s an age group that is trying to figure out what really matters in this world and why it matters that they were here. They’re wanting to leave a mark and know there’s more important things to do than simply work.”

Of those 10 million LinkedIn members who have added the volunteer experience and causes section to their profile, 71 percent are ages 18-34. They are supporting nonprofits across a diverse range of service areas, from UNICEF to Greenpeace and the American Cancer Society.

“The overriding driver is my belief that there are millions of people who want to make an impact in the world,” Garlinghouse said. “I grew up in a household that built volunteering into the fabric of our family. We did everything from helping lost puppies to lost people, to starting a school and a children’s museum. My big vision is to connect every LinkedIn member with an opportunity to impact the world.”

In pursuing their passion for service, young professionals engaged in skills-based volunteering are also gaining work experience that 41 percent of LinkedIn hiring managers consider as equal to paid experience when evaluating candidates.

Tellingly, soon after its inception the Emerging Leaders Council in Portland discovered that it was not unique. The idea for a young professionals group of Army volunteers first took root in Dallas, where the granddaughter of a National Advisory Board member started a young women’s auxiliary in 2010 for 21- to 35-year-old women. By the third meeting, the women opted to make the group co-ed, and within a couple of months had 70 members. Today, the Dallas Echelon chapter has nearly 600 members who pay a $75 annual membership fee to participate in the self-directed organization. It is now one of six chapters, including the Emerging Leaders Council, which is now called the Portland Echelon.

“It’s a very vibrant group,” said Major Ward Matthews, Dallas/Ft. Worth Metroplex area commander for The Salvation Army. Matthews serves as a representative of the Army at the monthly Echelon board meetings and events like the upcoming crawfish boil mixer.

The group’s annual fundraising party—called the 30M Gala for the number of people the Army helps each year—raised $200,000 in 2014. With that money, Dallas Echelon gives grants to Salvation Army initiatives like a domestic violence shelter, purchasing vehicles for economically struggling families and funding job training to help men gain full-time employment with lawn care companies.

“When we look for board members, we tend to think of those in their 40s, 50s, or 60s as those with clout and influence,” Ward said. “We forget that it’s the 21- to 35-year-olds who will take their place. It’s important because they can tell us how the world looks to them, and see things that we miss.”

While the value of contributing to the mission of philanthropic organizations like the Army may seem self-evident to the rising generation of young professionals, there is ample scientific evidence of the personal and psychological benefits of doing good for others.

“Almost any mental or physical health effect that you can think of has been found for volunteering,” said Jane Allyn Piliavin, a professor of sociology at the University of Wisconsin-Madison who has conducted numerous studies on social psychology, altruism and volunteerism. “Just getting out and doing things is good for you, but getting out and doing things that benefit other people is better for you.”

While Americans have historically assembled to engage in communal activities both for pleasure and to contribute to society, Piliavin said participation in groups has steadily decreased since the introduction of the television.

“People used to be in bowling leagues. They used to have bridge clubs, quilting clubs, choral clubs—things that people would go out of the house to do,” Piliavin said.

DO GOOD
Consider your passions and skills and volunteering avenues that could help you feel more fulfilled in those areas of life. Find volunteer opportunities with The Salvation Army.
-Find volunteer and board positions that leverage your skills and interests via volunteer.linkedin.com.
-Tell someone about your volunteer experience. When your family and friends see the benefits of your service, they might be inspired to get involved.
-Encourage your company to engage in service opportunities, from company-wide days of volunteering, to department or team service projects to benefit a cause.
The growing opportunities for service that are beginning to attract Millennials may reverse that trend.

Indeed, according to the 2014 Millennial Impact Report, companies are taking Piliavin’s advice and targeting young professionals in an effort to strengthen their workforce. As the report states, for a company desiring to build a culture that resonates with this growing cohort of current and future employees, leveraging young professionals’ passion for service is crucial.

Beyond compensation and benefits, the main factor influencing young professionals to stay at their company for an extended time is the ability to engage in some kind of philanthropic activity. Of those surveyed, 44 percent had volunteered their skills through their company to benefit a cause, and 94 percent enjoyed the experience of individualized, skills-based volunteering.

Back at her drawing desk in Portland, Neitling keeps the golden oldies and country classics on repeat as she conceptualizes spaces that nurture productivity and creativity. Asked about her experience with Portland Echelon, she immediately remarks on the leadership experience and exposure to event planning, corporate sponsors and marketing that she’s gained.

“Echelon has taught me how to how to communicate with others more effectively, and has been especially helpful in exposing me to an amazing network of professionals in the Portland area,” Neitling said. “Being a part of The Salvation Army has made me a better citizen of Portland as I am more aware of what is going on in the community around me. I am aware of who is struggling, and that there is a life out there beyond the realm of my day-to-day work.”

She added, “We are on this earth to help each other, and being able to do so is a gift.”