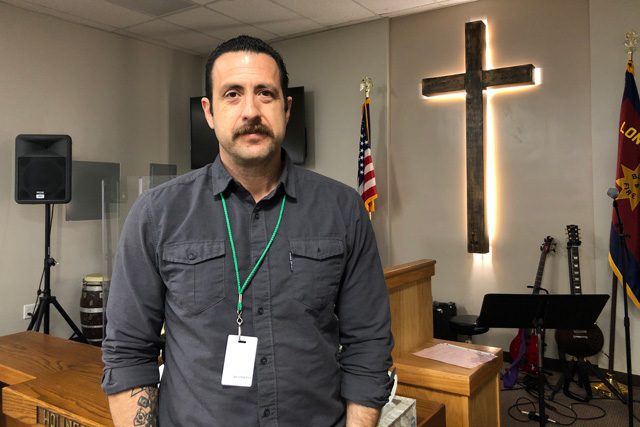 What it feels like to be born again, twice

Lying on a gurney in the emergency room, Eric was written off as dead. Doctors told him he flatlined seven times, and in a last-ditch effort, a surgeon sliced his chest open and manually encouraged his heart to pump. It brought him back to life.

Earlier that night, Eric said he and his wife decided to get drinks while working through their pending divorce. Afterwards, he was drunk, they got in an argument and he was locked out of their home—but he decided to break back in. A neighbor called the police. One thing led to another. Eric’s iPhone looked like a weapon and he was shot. So was a police officer, in friendly fire.

When Eric says he’s been given new life, he means it. He’s been brought back to life twice. He credited a higher power for sparing his life on the operating table, but what he didn’t know is he would find new life again through the Long Beach (California) Adult Rehabilitation Center (ARC), and that the large cross-shaped scar across his chest would be emblematic for God’s work in his life.

“I’m more in touch with my spirituality, and I’m learning to give everything to God, rely on God’s will instead of my own will, which I never would’ve done that if I wasn’t here. I always try to do things my way,” Eric said. “I’d say I’m being born again in here, and if I were in jail or prison I know that that would never happen.”

Following the shooting, Eric had the bottom half of his lung removed because it was full of shrapnel. He still has a bullet visibly protruding from his back. Once he graduates from the ARC, he plans to have it removed and turned into a necklace.

After he was discharged from the hospital, he was charged with being the cause of the friendly fire that injured a police officer and sent to prison.

“I hired a lawyer and by the grace of God the lawyer got me out of going to prison and got me into The Salvation Army,” Eric said.

He has been sober nearly 100 days at the time of this interview. He plans on sticking through Phase II of treatment and possibly going back to school.

“He’s going to beat this, his addiction,” said Phil Sonntag, Long Beach ARC Program Secretary. “He found God and he found Jesus as his Lord and Savior in this program, and that, if continued, is his answer.”

Eric admits life at the ARC was “rough at first.” Adjusting to living with 70 other personalities took getting used to. Because of the shooting, he’d been on disability, which made getting back to work challenging.

“He came in here broken and the work ethic has increased in levels that’s beyond measure,” said Lt. Samuel Snyder, Long Beach ARC Chaplain. “This is the joy of William Booth’s dream—that those who are lost and destitute come to a lighthouse, to a place, and we just stand back and watch the Holy Spirit take over and change people’s lives.”

Eric is a mentor and model beneficiary, and was the Work Therapy Assignment (WTA) Skills Beneficiary of the Week. He works eight hour days with the rest of the men, often creating bales of clothing to be sent out.

“He’s always available when you need something done. He’s always willing to lend a helping hand,” Snyder said. “We’re just grateful that he’s here. We just can’t wait to see what happens after completion of the program.”

Sobriety has helped to heal some of Eric’s relationships, especially those with his two kids.

“I’m able to see my kids—I just went out with them last weekend,” Eric said, recalling a recent outing for pizza. “When I was out there drinking and using I wasn’t able to see them. Now I call them every week and do things with them and check up on them.”

Eric said his kids know he’s safe at the ARC. They don’t have to worry about getting a call saying he was in jail or a psych ward, which was the norm when he was using.

Now, Eric says, “I feel like I’m in a totally different place now for the first time in my life.”