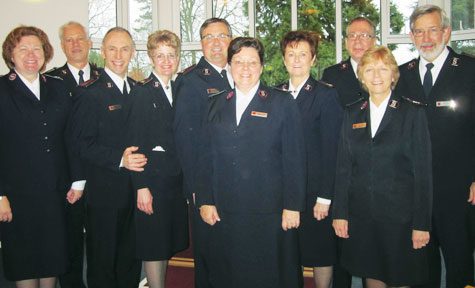 The delegation of Western Territory officers at the 2011 High Council (Photo by Paul Harmer).

“My wife and I left London with the strong conviction that we elected the right person to be our next General. We prayed a lot. We discussed a lot. Then we voted, several times. In the end: the right person.  I believe God led the  High Council and has honored our work as he has in the past. The challenges facing the new General are ominous; our support of General-Elect Bond vital and our reliance on him who called us into being essential. Alicia and I wish Commissioner  Bond God’s blessing and pray for his guidance for her and the entire worldwide Salvation Army. “

“Commissioner Linda Bond will be an outstanding General.  Her knowledge and experience equip her to reveal the Army’s past.  She possesses the wisdom to comprehend its present, and she has the spiritual sensitivity to anticipate its future.  Under God’s guidance, the 2011 High Council has made a wise choice, and I will join with Salvationists around the world in prayerfully supporting her in the days to come.“

“It has been said that the value of consistent prayer is not that God will hear us, but that we will hear him.  Knowing the Army world was praying for the proceedings to elect our next General, my heart was at peace.  General-Elect Linda Bond is without doubt God’s choice for this time in the Army’s history.  With continued prayer and support, our new General will lead us into exciting days ahead. “

“The 17th High Council to elect the 19th General of The Salvation Army was an incredible opportunity to pray and share together with 109 leaders of The Salvation Army throughout the world.  The High Council was preceded by the General’s Consultative Council where the days were spent in Bible study, discussion and prayer.  There was a continual awareness of God’s leading and direction that resulted in the election of Commissioner Linda Bond as General.  Linda comes with significant leadership and speaking skills and will give vibrant expression to the proclamation of God’s word in the days ahead.  May God Bless our new General.”

“Years ago I saw a movie where one of the main characters felt surprise and almost disbelief to be part of the action. Her response was, “Who’da thunk?” I love that line and use it quite often.

When I received the official summons to the High Council, a holy awe filled me. The awareness that the privilege of High Council membership was mine stayed with me throughout the proceedings. God gave me Jeremiah 33:2 & 3 on the second day of the deliberations. It was hard work to hear God’s voice over my personal concerns and bias. I do believe God used a human process to discern his will. Ten amazing people were nominated and all of them could have made a wonderful General.

Attendance at the 2011 High Council was an amazing and God-blessed opportunity, which is now history. God bless The Salvation Army.”

“Having worked with Commissioner Bond when I was the secretary for personnel, I found her to be open to appointing officers to their giftedness, dedicated to regular communication with her leadership team, including cabinet and TEC, and a dynamic speaker of the Word. I have every reason to believe that will continue to be the case”.

“I listened to Commissioner Bond as she communicated her Strategic Priorities, and worked on the effort to move the concepts out to the field. She was intelligent and articulate and passionate about the Lord and the Army. Recently she described herself as “leading with a limp,” and the humility was refreshing.”

Getting lives back on track at the Depot