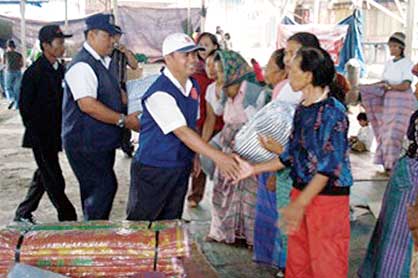 Volcano erupts in Sumatra after 400 years of silence

The Salvation Army assists thousands of people made homeless by the eruption of Mount Sinabung.

Salvation Army emergency service personnel assisted thousands of people after the eruption of Mount Sinabung, on the island of Sumatra, on Sept. 10, 2010. Two days later, residents reported a second and more powerful explosion accompanied by an earthquake-like tremor.

Inactive for 400 years, the volcano became active with a force that sent clouds of ash thousands of miles into the air, covering surrounding towns and villages. Two days prior to the eruption, a task force reported the volcano was showing signs of awakening—18 tremors and 18 plumes of volcanic ash were recorded, some as high as 340 feet.

Emergency shelters were established to house the 29,000 refugees forced from their homes.

The local Salvation Army Compassion in Action (CIA) team is working out of a corps in Kabanjahe, strategically located near many of the displaced families. The team distributed 400 mats and 150 blankets to evacuated cities near Kabanjahe. Government and non-government (NGO) agencies also provided assistance but additional help is required due to the high number of evacuees.

Evacuees living 6-9 miles from the eruption site have returned to their home villages. However, those living within 3-4 miles will remain in the shelters until their towns are determined to be safe.

The Salvation Army CIA team will remain in Kabanjahe pending a more comprehensive evaluation including information on how long people will be displaced.

Donations to the “South Pacific and East Asia Fund” may be made at salvationarmy.org.From Salvation Army international news