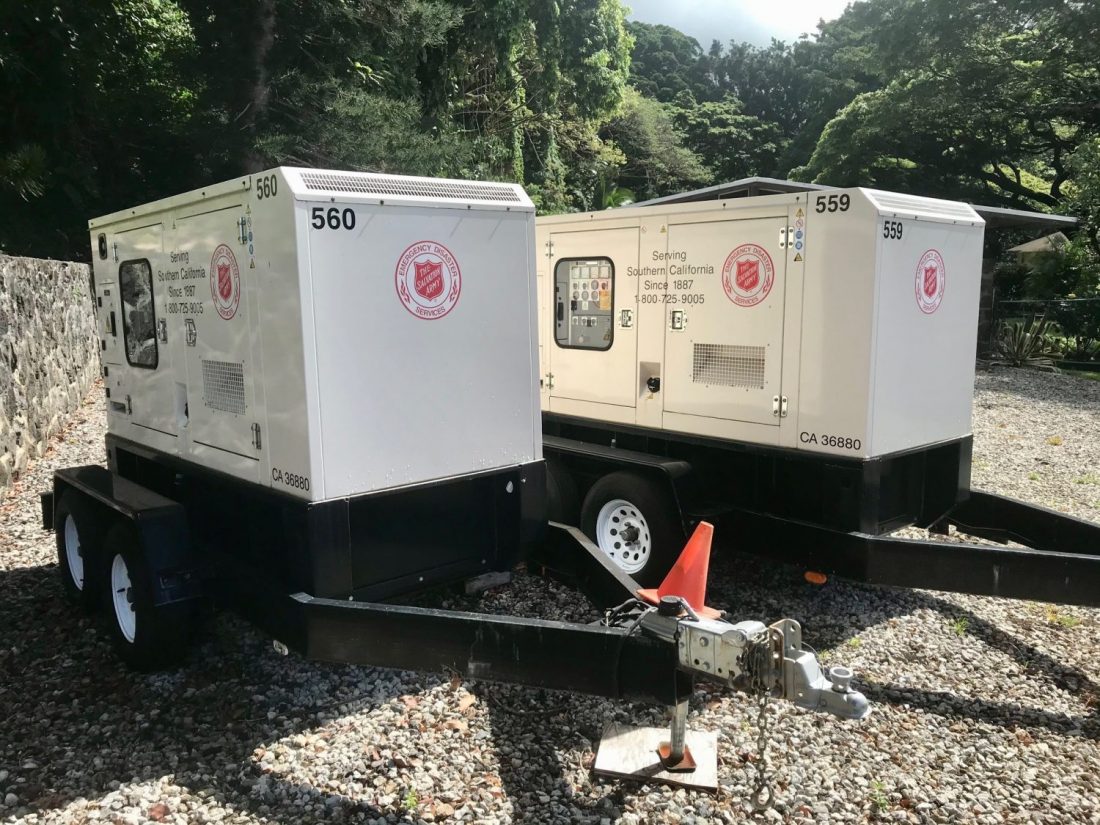 Generators arrive in Majuro after years of financial and logistical challenges.

The Salvation Army Western Territory is geographically massive, making it full of both possibilities and challenges. Certainly this is true for the farthest reaches of the Hawaiian and Pacific Islands Division that includes Majuro, capital of the Marshall Islands. There, the local Salvation Army had to wait three years for a shipment of a pair of 70 kilowatt generators, made possible by a generous donor with a love for the islands.

Just north of the equator, between Hawaii and Australia, the Marshall Islands consist of two chains of 29 coral atolls, each with a number of islands. Majuro—the capital city and the largest atoll—is 2,282 miles from Honolulu and 22 hours ahead of Hawaii Standard Time.

And while it may be the largest atoll, on Majuro Atoll, you can walk the width and length of the island.

“Paradise? Yes. But sometimes living on an island in the middle of the Pacific can create a few logistical challenges, especially when your division is separated by thousands of miles of water,” said Barbara Wallace, Donor Relations Director for the Hawaiian and Pacific Islands Division.

Major Stephen Ball, Divisional Secretary for Business recalled the beginning of that journey, in 2017, when the (then) Southern California Division gave the two 70-kilowatt generators to the Hawaiian and Pacific Islands Division. The gift arrived at Divisional Headquarters (DHQ) in Honolulu, where they sat in the parking lot for some months before leaders came to a decision.

“On Majuro Atoll, there are frequent power outages and always the need for emergency equipment,” Ball said.

Wallace said The Salvation Army Rita Corps in the Marshall Islands is the go-to location for the community in times of flooding, severe storms or when the power fails.

“We needed a consistent and reliable source of power to provide critical services, especially when disaster strikes,” she said.

So after a maintenance inspection and some repairs, the generators were ready for service and the division decided to send the generators to Majuro, to meet that community’s need. It just needed a way to get them there.

Wallace said The Salvation Army negotiated with five different shipping partners to transport the generators, with no success.

“The transportation companies kept backing out,” she said. “It was cost prohibitive. The generators were just too big and difficult to transport. Even the military could not get them shipped. But our Army never accepts defeat.”

The estimated cost to ship the generators commercially was $15,600—so the Army approached a donor, Barbara Smith. Wallace said Smith has been passionate about helping the people of the remote Pacific islands ever since a visit there in 1963. She saw the rising water marks firsthand, along with the challenges of life on a remote island.

“She knew the generators would serve an essential purpose and generously wrote a check to cover the entire cost and purchase a new boat and motor,” Wallace said, noting they were loaded onto a container ship for a month-long journey to their new home.

In Majuro, the generators are in a purpose-built garage between Majuro High School and the Rita Corps Community Center, with a goal of connecting one to the new high school student dormitory and the other to the buildings on The Salvation Army’s campus. The generators will supply power to the students in their living quarters and sustain program operations for The Salvation Army when power is interrupted.

“Local Army staff are working closely with the Superintendent of Schools to bring this plan to its fulfillment,” Ball said. “The generators will be left on the trailers so that they can be dispatched to any place on the island for emergency disaster response. This is a versatile and important use of the equipment.”

“We received a wonderful surprise in the transport invoice—no charge from Honolulu to Guam,” Wallace said. “Matson generously covered the cost for half the journey: a nearly $10,000 savings!”

With the donor’s blessing, that savings will be applied to further the mission in the Pacific islands, Wallace said, expressing her gratitude to Smith: “Such is the power of persistence, faith, and the kindness of others.”