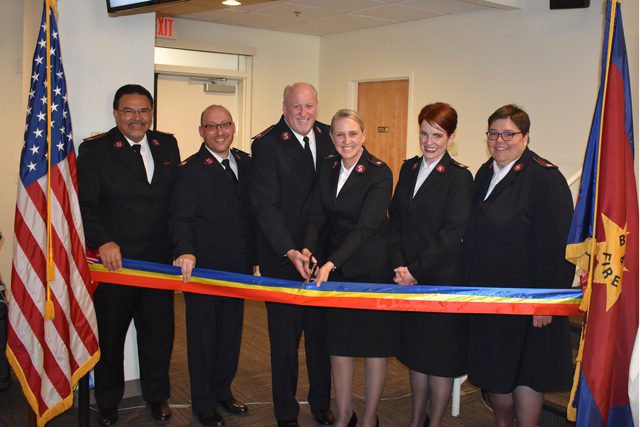 The Phoenix Adult Rehabilitation Center (ARC) dedicated the renovated women’s residence facility, called “Lyncrest,” May 15, more than tripling the ARC’s capacity for women from eight to 27 beds. The event was part of the celebration of National Salvation Army week.

“We saw a community need for more women to have an opportunity to benefit from our rehabilitation program,” said Major Darren Stratton, Administrator for Business at the Phoenix ARC. “This now provides us with an increased level of occupancy for our entire program.” Harvest of Decisions and Dedication

“The facility is beautiful and a place for restoration and renewal in the lives of the women who live there,” Colleen Riley said. “It is a place for new hope—hope for a future, leaving behind the things of the past and looking forward to what God has in store for their lives.”

Service highlights included a dramatic presentation by the women beneficiaries, followed by the graduation of one woman and one man from the ARC program.

“This is exciting!” Douglas Riley said. “It’s full of anticipation; there’s lots of things to come. There’s more ministry and impact that is going to happen in the days ahead.” The Salvation Army’s ARCs form the largest network of rehabilitation programs in the nation. At no cost to the beneficiaries, these centers give men and women battling substance abuse opportunities to stabilize their lives and regain confidence and self-respect, while developing a good work ethic and other responsible behaviors. The program’s continuing successful formula is built upon the principle of spiritual regeneration through Christ, combined with physical and emotional strengthening through meaningful work therapy and educational enrichment.

With reporting by Major Fred Rasmussen and Scott Johnson