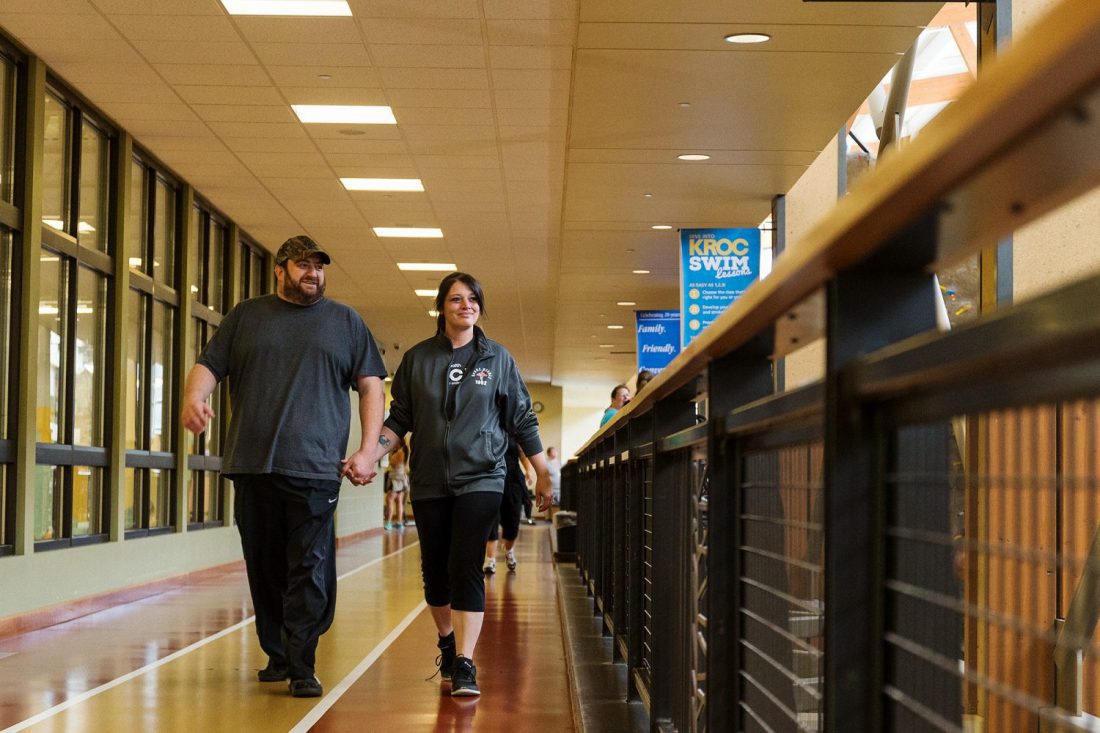 Kroc Center to the Rxcue

Jeff Menter was sick. Just 36 years old, the Post Falls, Idaho, man suffered from heart disease, chronic pain, obesity and depression. Menter was sick, but maybe most of all, he was sick of his self-imposed social isolation.

“When you have chronic pain, you just kind of stay in your shell,” he said. “Your pain is the only thing you’re focused on. You disengage from the world.”

Menter’s disengagement left him with sparse company: the 12 or 13 medications he uses regularly, including some narcotics for pain, and a compassionate partner. Lucky for him, Menter also had a pioneering doctor on his side.

Dr. Joseph Abate, medical director of Heritage Health in Coeur d’Alene and a cardiologist for almost three decades before that, took a special interest in his patient earlier this year. Abate pulled Menter aside from a chronic pain support group and said, “Our next appointment is at the gym.” With that Menter became the first recruit in a program Abate calls Kroc Rx, and the early results are both impressive and inspiring.

Through the program based at The Salvation Army Ray and Joan Kroc Corps Community Center in Coeur d’Alene, Menter and others are on the path to physical, emotional and perhaps spiritual healing. He was part of the initial Kroc Rx class of 26 Heritage Health patients. Twenty were diagnosed as medically obese. Five of the remaining six were medically overweight. A dozen of the patients were diabetic, and eight more were medically pre-diabetic.

Focusing on exercise and improved nutrition to break the devastating cycle of obesity and depression feeding upon each other, Menter and the other Kroc Rx troopers are reaping even greater rewards than they’d expected. His partner, Johnna Holden, raved about the program and the Kroc Center, a $90 million community gathering place that opened in 2008 with the expectation of attracting 1,500 members. Within a year, the Kroc Center claimed almost 15,000 members.

“Look at all the things you can do here; it’s amazing,” Holden said alongside the center’s indoor track. “You don’t feel like you’re in a gym, like big buff people all around you. You can be normal and exercise and be just a part of everybody. It’s really, truly a community feeling in here.

“You can come here in any size,” she said.

Holden’s role at Kroc was initially the same as it was at home.

“I’m pretty much here for support,” she said. “Jeff’s in his shell and I’m with him at home. He’s had several surgeries, and I’ve been his caretaker. I’ve seen all the versions of his depression. I try to motivate him, support him. We started doing the program together so he wouldn’t have to come here alone.” But things have changed—for the better.

Menter and Holden are excited because, on their limited income, through Kroc Rx they’ve qualified for a Kroc Center reduced-fee membership that will require them to volunteer some of their time in helping others. Both aspects of that offer please the couple.

“For me, it just goes back to being engaged, trying to be part of the community,” Menter said. “I want to feel like a person. We’re going to be members of the Kroc Center now. We want to make this part of our life—part of what we do daily, weekly, monthly and yearly.”

While Kroc Rx is in its early stages, Abate continues to augment the exercise portion of the program with seminars that cover emotional and spiritual health. Many of the seminars—featuring Abate, a psychiatrist and a pastor as the three speakers—take place at the Kroc Center. But with Americans gaining weight—the average citizen now weighs 24 pounds more than his or her counterpart in 1960—healthcare costs skyrocketing and people relying increasingly on pills to solve their problems, Abate’s putting the full-court press on Kroc Rx. And he’ll tell you, the place matters.

“For us it was as simple as saying, ‘Your next office visit is at the gym,’” Abate said. “That was the hook. I don’t know why that’s the hook, but I believe it’s based on relationship. You have a person that you’ve been working with. You’ve heard their complaints for months and months, if not years. You’ve heard them talk about how they really would like to do the things you’re suggesting to them, but there’s just too many obstacles.” With one phone call, one appointment, Abate becomes the obstacle remover.

For anyone who has ever experienced the benefits of exercise, Kroc Rx makes perfect sense. Flicking on that initial switch is critical.

“It’s easy to say there’s no one who wouldn’t benefit from physical activity,” Abate said. “Bodies were made to move. Even people with very significant limitations can come in here, get in the pool and start their workout.” From the Kroc Center pool they can graduate to the track, then, perhaps, beyond to more strenuous exercises.

“It’s amazing to me how many people we have heard say, ‘Gee, I haven’t walked a half mile or a mile in years,’” Abate said. “And here within three weeks, they’re up on the track and they’re walking a mile.

“You need the right environment,” he said. “The thing that’s wonderful about the Kroc Center is that, as a community center, it’s far less intimidating…It’s not a bodybuilding facility. People can come in, look around and they see people who look exactly like they look. They’re just ordinary people who are here to feel better and get fit.”

Mike Patrick is managing editor of the Coeur d’Alene Press in Idaho.