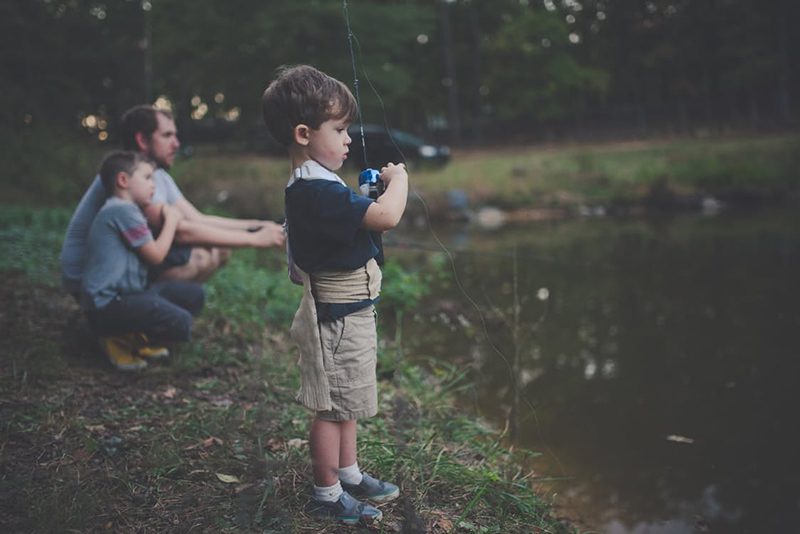 The Salvation Army and the National Louis University partner to research methods for strengthening the paternal role in family and community.

From the strong moral compass to the breadwinner to the equal partner—what defines a good father has evolved throughout the years. But whatever the role, studies show that the biggest impact a father can make is a stable presence in his child’s life.

Nationwide, 24 percent of children grow up without a father, according to the U.S. Census Bureau. In Chicago, that number skyrockets to 50 percent.

In response, The Salvation Army launched Fatherhood in Action in 2016. Funded by the Healthy Marriage and Responsible Fatherhood Grant (disbursed by the U.S. Department of Health and  Human Services), The Salvation Army and National Louis University in downtown Chicago partnered for the next five years to research methods for strengthening the paternal role in family and community.

“The program formed because of the problem we’re seeing in our city and nationwide,” said Derrick White, facilitator of the Fatherhood in Action program.

Social problems such as high dropout rates, early pregnancies, crime and poverty tie back to the lack of a father’s presence, White said. So it’s vital to help fathers develop strong skills to be better parents to their children and better partners with their co-parents.

In this program, fathers are treated as the foundation of the family. The way family is established, the role of both father and mother is vital, White said, but fathers provide an identity for their children. If the father is positively impacting his family, it leads to security and safety, he said.

Fatherhood in Action’s curriculum, called “On My Shoulders,” focuses on several skillsets. Sessions on soft skills like communication, personality, commitment and attachment teach participants how to be understood effectively, while learning about their own personality traits, as well as those of their co-parents and children. They also learn to integrate that knowledge into a dedicated and nurturing role for children.

DO GOOD
– Give to The Salvation Army’s efforts for families in your community at westernusa.salvationarmy.org

– Read “Do Fathers Matter?: What Science is Telling Us About the Parent We’ve Overlooked” (Scientific American/Farrar, Straus and Giroux, 2015) for more on the various stages of fatherhood. With research from neuroscientists, animal behaviorists, geneticists and developmental psychologists, journalist and father of five Paul Raeburn makes the case for a new perspective on the fathers in our lives.

– Write a note to a father in your life—your own, your children’s or one you admire—thanking him for being committed to his children.

“When fathers are committed to their children it brings a lot of emotional, physical and community safety,” White said.

“We encourage our fathers to learn to work together with their co-parent for the betterment of the child,” White said.

The curriculum also includes sessions on creating a happy life.

“By finding a purpose in life, fathers can find happiness in life,” White said. “And fatherhood is one of the greatest fulfillments of a man.”

Charles Stroud, who recently completed the program, said he joined because he was interested in becoming a better parent to his two daughters, ages 27 and 8.

“I’m learning how to relate to people a little bit better, rather than looking at everything through my point of view,” Stroud said. “For example, my co-parent and I would have conflicts about my younger daughter’s schedule, but I’ve learned how to better understand what she’s dealing with.”

Fatherhood in Action’s sessions are geared toward men coming out of rehabilitation programs or were recently incarcerated, like Stroud.

“With my older child, I can explain situations to her, like the times when I wasn’t there, and be more open with her,” Stroud said. “I’m becoming more of a father and she’s understanding it, and trusts that I will do what I say.”

But his difficult past struggling with addiction and frequent incarcerations, Stroud has more work to do with his younger daughter.

“She needs me to be more protective and show her that I’ll always be there for her,” Stroud said. “I can’t replace the time that I lost with her and she still might get upset with me sometimes because she hasn’t seen me a while, but a smile will eventually come back to her face.”

White and his team recruit fathers through Harbor Light Freedom Center and the Adult Rehabilitation Center (ARC) to ensure the participants are committed to their rehabilitation and can commit to the time frame. The program also secured a partnership with the Cook County Jail to offer services to formerly incarcerated men.

As of December 2016, the program had served roughly 90 participants as part of the research program. Half of the participants are in a control group, mostly taking surveys about fatherhood and their involvement in their children’s lives. The other half receive services outlined in the curriculum.

One challenge the program faces is making sure the fathers finish the program, which meets twice a week for two-and-a-half hours over eight weeks. Some of them have to find employment, which impacts their attendance, according to White. Not only can time be a barrier, but so can the emotional weight.

“Some fathers may have some problems with addiction or substance abuse. That can lead to negative emotions with co-parents, or some co-parents make it difficult for fathers to even see their children,” White said. “We encourage them to build up trust again, but it takes time and it’s difficult.”

“So far, we’re seeing great results. The response and the feedback from the fathers we’ve served is 100 percent positive. They come in one way, and they leave with hope, encouragement and a positive outlook,” White said.

After participants leave, they feel empowered to make a difference themselves, White said. The lessons they learn in the program inspire them to mentor others who are in their shoes. Stroud said he hopes to get a job working with The Salvation Army, and continue improving upon himself.

As he said, “I would suggest this program to anybody who has relationship with a child, or looking to get a better understanding of a child.”