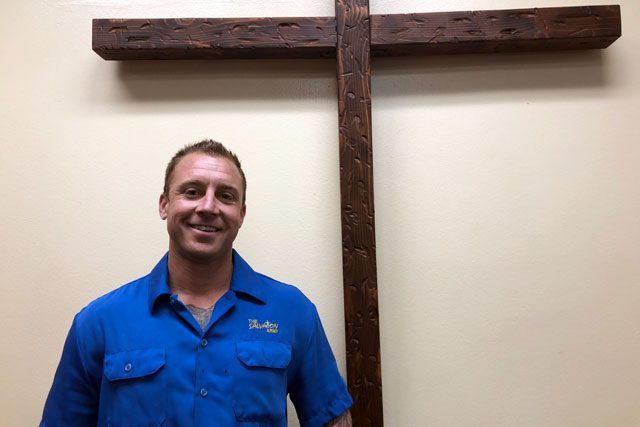 ARC beneficiary hopes the 31st time is the charm.

Michael has done drugs and alcohol since he was 14. Now in his 30s, he’s been to 31 rehab programs. He hopes to make the Canoga Park (California) Adult Rehabilitation Center the last one.

“I’ve been to a bunch of programs. I’ve overdosed nine times. I’ve got three DUIs. I’ve just been through it,” Michael said. “I’ve had everything before, the house, the cars—everything—and I’ve also had nothing.”

Addiction cost Michael his marriage and contact with his kids. He’s experienced seasons of homelessness. Through the ARC, he’s experiencing change, and he’s giving back through a new skill he’s developed: woodworking.

Michael is a Kingsman, part of the Territory-wide Kingsmen program that offers beneficiaries a chance to learn about God, connect with different corps, serve the community and mentor others.

He has built a pair of prayer request boxes using materials found at the ARC warehouse that the Kingsmen go through and pray over. One of the boxes is etched with 1 Thessalonians 5:17 (NIV): “Pray continually.”

While Michael said he had always worked with his hands in his garage prior to his time at the ARC, woodworking is new to him. After Michael made the prayer boxes, Trainee-In-Charge Captain Troy Cook asked him to construct a cross for the center’s chapel, and he did—with extra care to add rugged details.

“I used a bunch of different stuff to give it that rustic look…and I was just praying on it,” he said. “It really meant a lot to me that he asked me to make it.” “I notice how he didn’t just make it plain, he kind of banged those little things on it to make it look rugged. I think it’s unique in that way,” said Captain Felicia Cook, Trainee-In-Charge. “He’s very talented, and I don’t know if he knows how talented he is.”

For Michael, the cross is more than a project; it’s emblematic of the change he’s experiencing.

“Just that I could give back and, I could be redeemed for all the bad stuff I did,” he said. “I really could be forgiven for all of my stuff because I never thought I was good enough.”

Michael got out of prison in 2018 after serving five years, and he went straight back to drinking.

“It just brought me to the lowest place I’ve ever been. I didn’t want to live anymore,” he said. “I had to do something, so I came here, and I really want it this time. I’m doing everything I can—I’m getting really close to God. I pray constantly and it’s changing my whole life right now. It’s totally different from what it was.”

Michael relapsed after four months at a different program before he came to the Canoga Park ARC. Now that he’s finishing up phase one, he applied to stay on for phase two of recovery—the phase that’s not court mandated.

“It just seems like he’s happy, opposed to when he first came in,” Felicia Cook said. “He has joy when you’re talking to him. There’s just some light that’s come on.”

Outside of woodworking, Michael serves on the maintenance crew around the ARC and has become a “model beneficiary,” according to Cook.

“We ask him to do anything and he doesn’t complain,” Cook said. “Recently he was sick; we had a cold going around the house and I thought, ‘When is this guy going to ask for a lay-in?’ but he just worked through it all…He just powered through it.”

For the Western Territory’s ARC Men’s Retreat, each center was asked to bring a birdhouse for a contest. Whichever center won would get money for a barbecue.

“I thought ‘Oh, great! We have the perfect person to do it,’” Cook said.