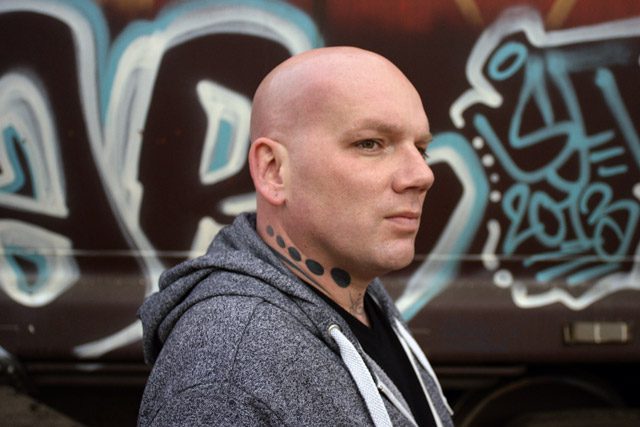 As a child growing up in Wisconsin, Koebel was drawn to the performing arts. He later studied music and theater at Judson University, in the suburbs of Chicago. After graduation and a stint at the Second City Conservatory, he landed in New York City, where he was soon working regularly as a stand up comedian.

Even though he loved comedy, Koebel discovered he didn’t like who he was or where his life was going when he was not performing. Something was missing. He began drinking, and was soon using a combination of drugs, which he said became a “security blanket” that kept him from dealing with his life. “Ultimately those chemicals took over everything for me in New York and I just quit doing everything,” he said. “Quickly.”

Koebel became overwhelmed one night following a cocaine binge. He called his parents and told them he needed to come home. They bought him a plane ticket, and he flew to Wisconsin that night. Yet even though he removed himself from that scene, Koebel did not stop drinking. It caught up to him in the form of five DUIs in six weeks. After serving jail time, his caseworker placed him in an outpatient recovery program, but he went right back to drinking, even timing his intake to pass the mandatory drug and alcohol tests.

Eventually, Koebel said he felt so out of control that he went to his caseworker for help. “You need to put me in some sort of program where I can’t leave,” he told her. “I gotta be…locked in somewhere and learn the basics of life again because I don’t remember anything.”

The caseworker told him in a previous job she sent people to The Salvation Army Perris Adult Rehabilitation Center (ARC) in Riverside County, Calif. Koebel arrived in California a couple of weeks later, and after a few days of detox, he was allowed to check in on his birthday in 2006.

Early in his time at the ARC, Koebel said he felt hopeless and without joy. He observed the ARC administrators, then-Captains Man-Hee and Stephanie Chang, and concluded: “There’s got to be something about this God thing that these two people want so badly for all these other people to see it that they’re doing this,” he said. “So I gave that a try. And I realized, wow, I have, like, a little bit of hope now.”

Following his graduation, Koebel began working at the ARC and attended the Hemet Corps. Every evening, he prayed in the ARC chapel. One night, he clearly recalls hearing God: “I want you to live this life of service. And you can do this as a Salvation Army officer.” He didn’t agree, but as he ministered to the ARC beneficiaries, he started to feel that maybe this was something he could do.

Koebel entered the College for Officer Training at Crestmont in 2009, was commissioned in 2011, and is now the divisional youth and candidates secretary in the Sierra del Mar Division, serving with his wife, Lt. Ashley Koebel. The two recently adopted a son and daughter out of the foster care system. He now laughs when he thinks about his old fears that a sober life would be boring. “There is nothing boring about being an officer,” he said.

A few times a year, Koebel returns to the Perris ARC to share of God’s transforming power in his life. He said it  reminds him of how thankful he is for his addiction and recovery, because he said it was the road he had to travel to discover God’s enduring love for him.

“The beauty of it…is he’s put all those messy pieces of my life together into this puzzle that I could never have imagined,” Koebel said. “By surrendering my entire life to God, all these amazing things have happened to me. Are there still bumps in the road? Heck, yeah. That’s normal. It’s a lot easier to get through those bumps, though, when you have a constant love in your life.”