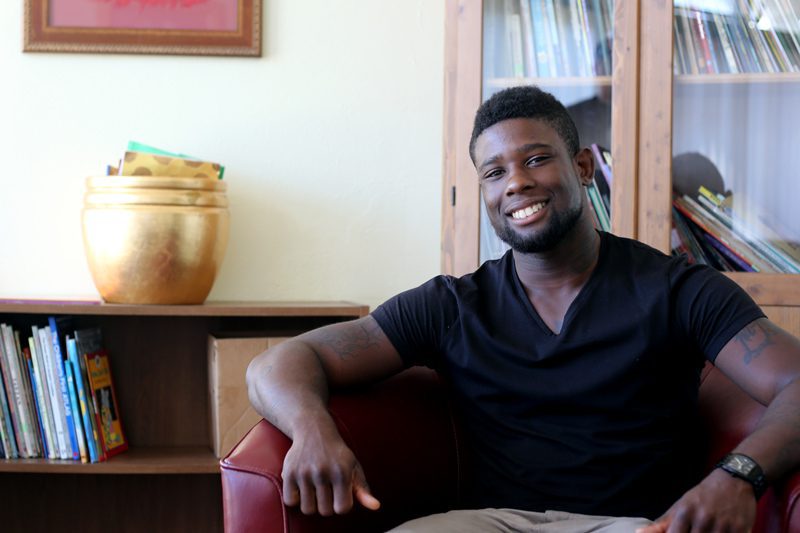 “I died and came back—overdosed actually,” Ian Butler said. “My vision was getting blurry and I was getting ready to go, getting ready to die so I said my last prayer and said, ‘If I make it through this I will never do drugs again.’ They revived me and I woke up. They said they brought me back and I’ve been clean off of drugs ever since.”

Butler lived on the streets with his mom for eight years, until they found refuge at The Salvation Army Door of Hope in San Diego, Calif. He lived at the Door of Hope from the age of 8 to 12 and said he couldn’t then envision what he’d become by 25.

“My mom wasn’t financially educated to raise a child,” Butler said. “It’s not like she was on drugs or anything, she just didn’t know how to raise a child and my dad was never involved; I don’t even know him.”

According to the Regional Task Force on the Homeless in San Diego, 8,506 people currently live on the streets. Door of Hope offers transitional living for homeless women with children, plus career counseling, anger management, domestic violence and substance abuse support and financial management.

While at Door of Hope, Butler’s mom learned how to save money and provide for her son. Still, Butler yearned for something greater.

One fall, the center paid for him to see a San Diego Chargers football game. He saw the players on the field use strength to win the game and in the process inspire fans. He could be a pro athlete too, he thought.

Butler’s talent secured him a wrestling scholarship from the University of Missouri in St. Louis, where he discovered mixed martial arts. He was good, but Butler said he began to get cocky, smoking marijuana and taking pills until it left him unconscious and in the emergency room.

“I had friends—people who I thought were my friends—that gave me a box of 30 pills I swallowed,” Butler said.

Butler survived, but a torn ACL in training soon after, derailed his comeback. His doctor told him he wouldn’t be able to fight again. He explained that year was the toughest of his life.

“I was depressed and had no money,” Butler said. “If you don’t fight, you don’t make money. Sponsors won’t pay if you’re not putting your name out in fights. I knew I needed to do something so I became a special education teacher, helped out with sports and started rehabbing. My whole life changed after I started doing community service work.”

Because of his experience helping kids, Butler now gives back to various causes including Fighting for Autism, where he’s the lead fight ambassador, and the Tap Cancer Out foundation.

After a year of rehab, he was also able to return to form, recently fighting at the Bellator MMA Fighting Championship Tournament in San Diego in front of 16,000 fans, including his family and kids from the Door of Hope program. Butler helped fund their tickets to the event.

“The more I’m successful the more I can inspire and have other kids be successful,” Butler said. “It’s instilled in my heart. I have a vicious fighting style, but it’s a character of where I came from and what I represent. When I go out there and fight, I know other kids are looking up to me and where I came from.”

Butler said he now understand being humble and giving back is just as important as being a champion people can look up to and that The Salvation Army was instrumental in where he’s at now.

“Anybody that was involved in the Door of Hope Salvation Army completely saved my life and made me the person I am today,” Butler said. “It helped me build my character of who I am. When I was a little kid I was very shy; you guys helped bring out the person in me. It made me give back and do all these great things because you saved my life when I was a little kid. Thank you.”

🙏 Spirituality: How to have an unhurried approa

🙏 Spirituality: Breathe and experience the wond

🎄 Little Do Gooders Guide to Advent for Familie

📣 You're invited: Virtual Do Good Expedition⁠