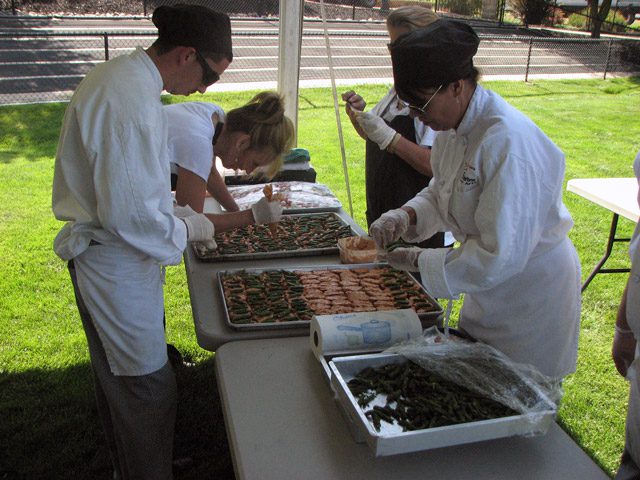 In Lodi, Calif., a spot in the kitchen is helping to ensure Hope Harbor and Stockton Adult Rehabilitation Center (ARC) graduates’ sobriety.

When the corps’ advisory board recognized a lack of employment opportunities five years ago for these graduates, it produced a vision, spearheaded by Linda Greenle, for a training program.

With a small grant, a committee of advisory board members secured the assistance of Chef John Britto, former instructor of the Culinary Arts School at Delta Community College in Stockton, Calif. He prepared an extensive curriculum for a 16-week training program, including plans for the necessary capital and annual operating budget.

In January 2008, the Culinary Arts Training Program (CATP) for the Lodi Salvation Army began with Britto as the instructor. Twice a year, it offers up to 10 participants the opportunity to develop kitchen skills to support and retain employment. This professionalism instills confidence and dignity.

“Once our culinary arts training program class started, I knew I wanted to make cooking my career,” said John Haviland, a graduate of the program who later became head chef at the Loel Center and Gardens. “I am now able to support a family, and I have a car. I never thought I would be in this position.”

With eight program graduates, the inaugural class was a success.

“I never knew what a ‘Roux’ was or what it meant to cook in large volumes, for a group of over 200 people,” said Laurie Keff, a graduate of the first class. “I am now working for Wine & Roses cooking in the cellar room, for small parties on my own, and in the banquet kitchen. I was even named the Employee of the Month for June 2010!”

Also from this class, under the guidance of Britto, former Hope Harbor and Stockton ARC graduate Barry Crall took over the direction and instruction of CATP. With over 25 years of culinary experience himself, Chef Crall has taken the curriculum to a new level. In his classes, students are also trained in food safety in order to pass the ServSafe food handling test.

The CATP recently graduated its ninth class for a total of 53 students.