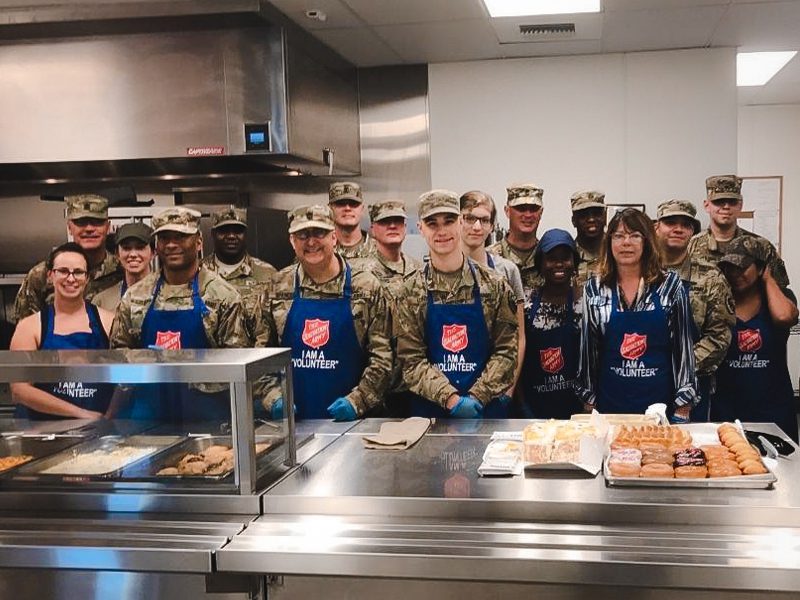 The face of The Salvation Army in one community, telling anyone who will listen how the organization helps its neighbors.

For more than a decade, The Salvation Army Sierra Vista Corps in southwest Cochise County, Arizona, was housed in a 1,500 square foot former dental office with an 86-square foot kitchen with tables that sat 24 at a time.

The limited seating meant clients were often forced to eat outside, which posed a problem during Arizona’s summer heat, monsoon rains, and winter storms. In addition, there was no dedicated space for counseling or confidential discussions.

A fundraising campaign started in 2012 raised $1.6 million for construction of a community center next door to the old office, and in September 2016 a grand opening celebration heralded the new 10,000 square foot facility.

Ten percent of the space houses the kitchen and there is ample room for 100 diners plus a large chapel with room for a band. There’s also meeting and conference areas to provide privacy for clients seeking counseling or spiritual guidance.

Longtime volunteer T.K. McCutcheon served as chairman of the construction committee. He noted that building the new center was only the start. Ensuring the facility is well-utilized and that “we are serving our community to the best we can” is key.

And that, says McCutcheon, is where “Captain Carlos” comes in. 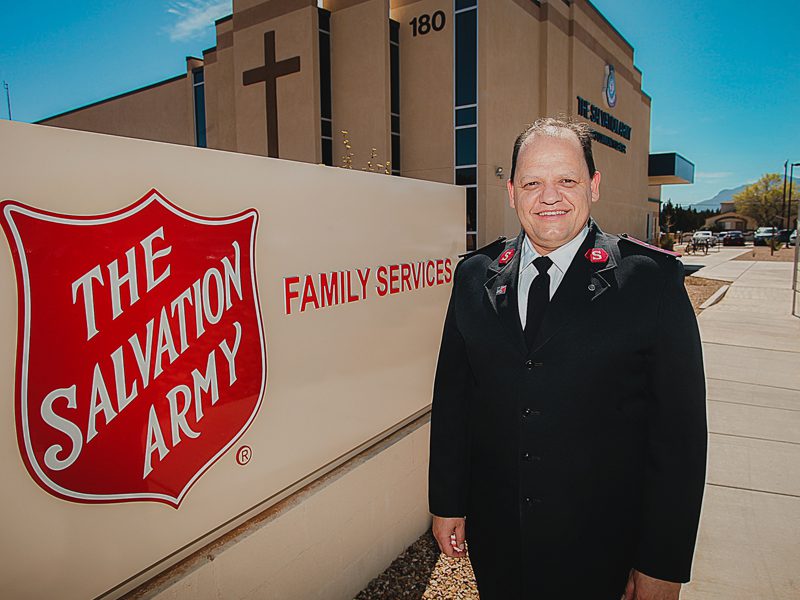 The Sierra Vista Corps Community Center is one of 260 in the Western Territory, different in every local community because every local community is different. See more about The Salvation Army in your community at westernusa.salvationarmy.org
“Aside from his ministry, Captain Carlos has strong organizational skills and business acumen that are key to our ability to serve Sierra Vista and the surrounding communities,” McCutcheon said. “He’s done a tremendous job recognizing the needs of our community and then putting that into action.”

The Sierra Vista Corps is the fifth appointment in 15 years for Souza, a former small business owner who says he is “thoroughly enjoying” his current assignment. He is using his business experience and marketing skills to promote the work of The Salvation Army here.

“I attend as many community meetings as I can and speak about the Sierra Vista Corps anytime I’m given the chance,” Souza said. He has also strived to meet one on one with several elected officials and business leaders.

Although he may mention the Sierra Vista Corps’ need for volunteers or donations, “my emphasis is always on what we do for our community,” Souza explained. “Then I can explain how someone can help us do what we do and even do more.”

One such official Souza established a rapport with is Cochise County Sheriff Mark Dannels. As sheriff, Dannels is the top law enforcer in the county, which encompasses 6,200 square miles. In comparison, the states of Rhode Island and Connecticut cover 6,700 square miles combined.

“The Salvation Army, their volunteers, and staff are a true resource for our county and Captain Carlos Souza is an energetic and extremely persuasive leader,” Dannels said. 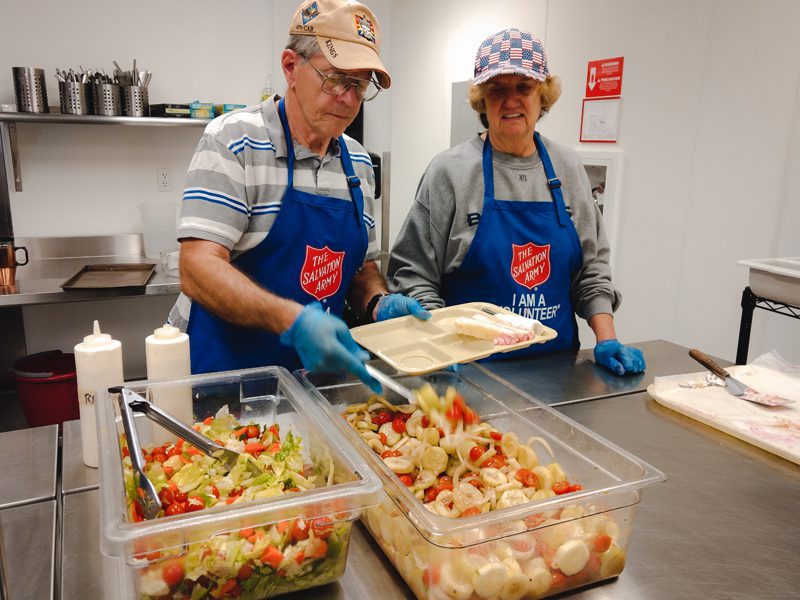 Volunteers plate up a hot lunch donated by the Olive Garden restaurant in Sierra Vista. Captain Carlos Souza has arranged for more than a dozen local restaurants to sponsor one meal a month.

When Souza set his sights on improving the local Red Kettle program, he organized the Sierra Vista Corps’ first ever Red Kettle Kick-Off event, which was attended by about 100 people and resulted in a $27,000 net.

Souza also reached out to Dannels and other prominent community members asking them to be bell-ringers.

“Based on the Captain’s request, the Sheriff’s Office had the honor of participating in the Red Kettle program during the holidays,” said Dannels, who volunteered on Black Friday. “It’s a new community outreach project for us that we hope to continue for years to come.”

In total, the 2017 kettle campaign netted nearly $130,000 with 99 percent volunteer bell ringers, which Souza reported is a 201 percent increase from the prior year.

“The successful Red Kettle campaign is an example of the personal connections Captain Carlos has made with people who can open doors so we can get our services to those in our community who need them,” McCutcheon said. 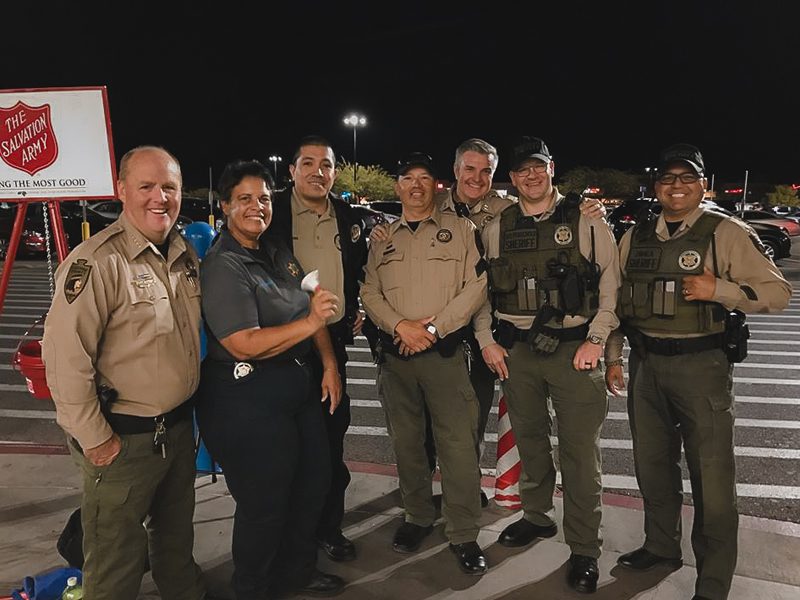 Souza’s outreach efforts have had a similar impact on the Sierra Vista Corps’ hot lunch program.

“Sometimes it may be their main meal of the day or their only hot meal,” Souza noted. “It’s one reason our lunch program is a focal point of our activities.”

Sierra Vista Mayor Rick Mueller said the 100 or so hot meals served on weekdays “fill a critical need for our city of 45,000.

“Although we have a number of charities in the area, there are hundreds of residents who rely on those meals,” Mueller said. “Without The Salvation Army in Sierra Vista we wouldn’t be a complete community.”

The Sierra Vista Corps has streamlined the meal program so that 100 people can be fed a nutritious hot meal for less than $350. That cost-effectiveness, McCutcheon noted, is something Souza leverages when seeking lunch sponsors.

“Captain Carlos demonstrates how people’s’ time and money has immediate benefits in our community,” McCutcheon said. “He shows the restaurants, service clubs, churches, businesses, and neighborhood organizations what an incredible impact they can make being a sponsor, whether it’s once a month or once a year.”

In recent months, he obtained a commitment from a group of U.S. Army personnel from nearby Fort Huachuca to assist in preparing and serving the meals.

Souza talks excitedly about his hope to add a delivery feature to the program. He said this would benefit Sierra Vista’s small but ever present homeless population as well as dozens of homebound seniors and others in need. 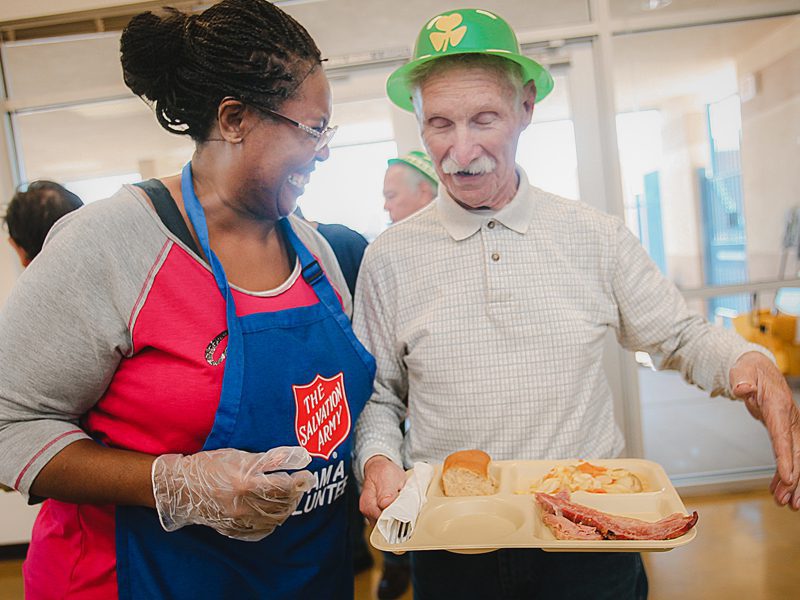 He and the advisory board have also discussed a proposal that is close to Souza’s heart—the construction of a multi-purpose building on the site of the old facility to allow the Sierra Vista Corps to offer programs geared to at-risk kids in the community.

“We can have a life-long impact by reaching out to kids through guidance and support,” Souza said, calling it “one of the most rewarding things I can do.”

A second goal is the establishment of an endowment to help fund future operations. That task is made easier, McCutcheon said, “because the management under Captain Carlos and Captain Gildete has shown people that donations to The Salvation Army are well-utilized.”

It helps, Souza admits, that the new building carries no mortgage or debt, allowing him to spend most of his time and efforts providing services instead of fundraising.

“I was able to come here without need to worry about fixing the roof or the plumbing, so I can utilize my time and effort to reach out,” he said. “It allows me to do what I love.”

“One of the most special things about the Captain is his caring nature,” Dacus said.  “And the volunteers here reflect his quality and tone.”

Terri Jo Neff is a writer based in Cochise County, Arizona.