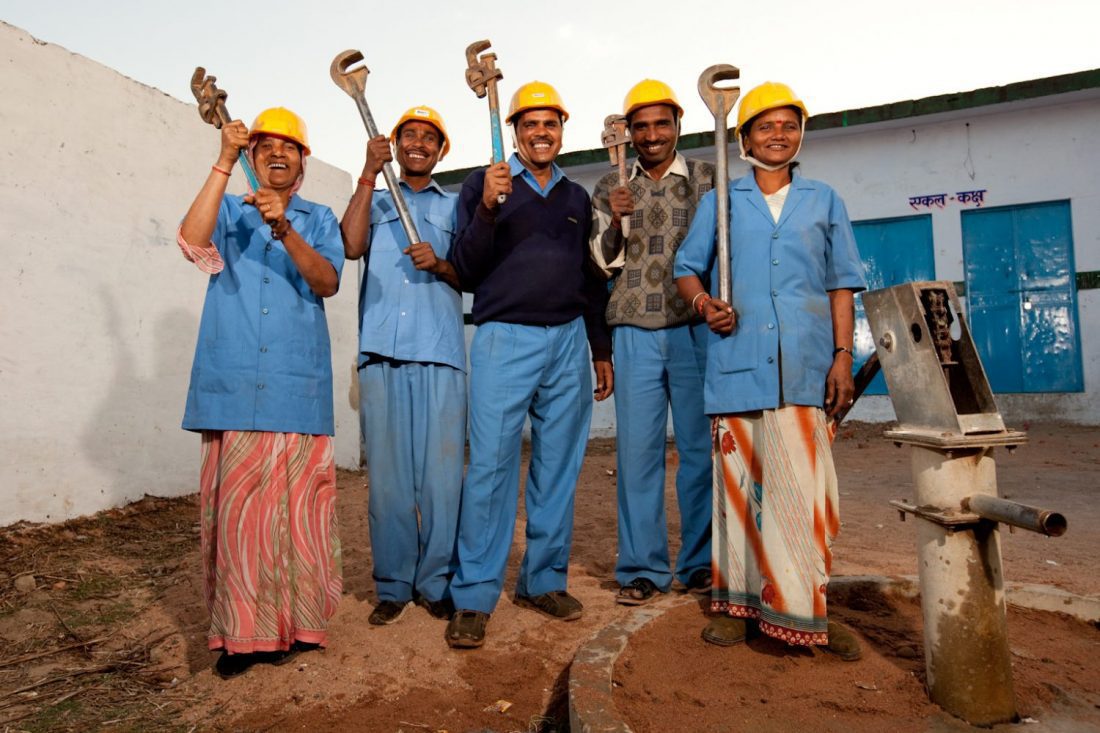 Can a job save the world?

With creativity and commitment, The Adventure Project is putting people to work.

Becky Straw has an energy and zeal you can feel. She has an ease about her that permeates from her hazel-green eyes.

Straw is the co-founder of the nonprofit The Adventure Project, admittedly not a path she expected to take. To date, it has partnered with four social ventures in four developing countries. Each venture seeks to provide systemic solution to achieve a sustainable, social objective. Through these partnerships, The Adventure Project has created more than 500 jobs. Each one changes someone’s direction, much the way Straw changed hers.

Straw grew up in what she refers to as a “bubble” without much experience outside of her suburban community in Lafayette, Calif. She had a loving family, volunteered with her church and was involved in sports, particularly swimming. This love of competitive swimming would later lead to a scholarship to the University of the Pacific in Stockton, where she studied graphic design and traveled abroad for the first time, visiting 10 countries within two months.

After graduating from college, she worked with two missionaries in Romania, who were rescuing kids in danger.

“The orphanage had 100 kids dying every year; it just opened my eyes to extreme poverty and issues of social justice,” Straw said. “It also got me to think about how aid works.”

Straw felt she had to do something to help those living in extreme poverty.

According to the World Bank, roughly 1,345 million people in developing countries live on $1.25 a day or less. After 10 years of investigation, the Chronic Poverty Research Center (CPRC), an international partnership of universities, found that Chronic Poverty is a varied and complex phenomenon, “but at its root is powerlessness.”

Ultimately what makes a country powerless is the absence of a working economy, according to Professor Adlai Wertman at the University of Southern California, an expert on nonprofit management and social entrepreneurship.

“We [America] have businesses that allow people to take raw materials and create value that we then sell either to each other or other people,” Wertman said. “That’s how we’ve created value out of labor, we create jobs and people can work in those jobs and take care of themselves.”

Wertman explained that job training isn’t the issue at the real bottom of the pyramid because there’s no job to train those in extreme poverty for. He said it’s really about entrepreneurship and how you help build businesses that will eventually hire people.

After seeing the devastating effects of poverty, Straw applied for and was accepted into the social work master’s program at Columbia University. She worked with the United Nations and then UNICEF’s Division of Water and Sanitation where she met Scott Harrison, creator of the nonprofit charity: water.

charity: water brings clean and safe drinking water to people in developing nations. Founded in 2006, it has funded 6,611 projects in 20 countries, benefitting more than 2,545,000 people. Working with the organization, Straw traveled to Africa six months out of the year to manage the charity’s progress.

According to the World Bank, roughly 1,345 million people in developing countries live on $1.25 a day or less.

“We often see people as different than us and in actuality people are exactly the same,” Straw said. “Generally they want to take care of their family, send their kids to school and be healthy. What people want the most is an opportunity just to take care of themselves.”

Working with charity: water in Liberia, Straw met Jody Landers, who had done extensive fundraising for the safe water nonprofit. The pair shared an interest in empowering people to work. However, Landers explained the two of them couldn’t have been more different. Straw was a single girl living in New York and Landers was a wife and mother of six living in Iowa.

“But I just couldn’t get enough of [Straw], she was so smart and I had a million questions about how we could best use our money,” Landers said. “She came from the background of being very educated and having a lot of experience in the field and super passionate about wanting to provide an avenue for my friends and family to be involved in those issues.”

This common interest spurred Straw and Landers to create The Adventure Project in 2010. The nonprofit organization adds venture capital to support social enterprises in developing countries. In order to fund the organization, Straw moved her stuff into storage and surfed friends’ couches in New York; she didn’t take a salary for a year and a half. Now 4,000 individuals help fund The Adventure Project with an average gift of $100.

The nonprofit is currently working on a website platform to display for donors exactly how much money is needed to help one person. Straw wants to be clear about its metrics and also make sure updates are given regularly, so donors knows exactly where their money is going.

After a year, you’ll receive the story of the individual you supported, showcasing your impact in action.

By donating, you create a job.

“In normal circumstances of most charities, once you’ve built a well or you’ve helped build a school, you never find out how those people are doing,” Straw said. “It’s very rare you get an update. We wanted to build a system that would revolutionize giving and make it very transparent.”

The Adventure Project funds programs in India, Haiti, Kenya and Uganda that are helping solve the problems of healthcare (training men and women to sell health products), water (by teaching well mechanics), hunger (by providing irrigation pumps for farmers) and environment (providing charcoal-efficient stoves, which are sold locally in Haiti). Together these enterprises serve nearly 900,000 people.

One of its partners is Living Goods in Uganda, which combines an Avon door-to-door sales model with the effectiveness of community-driven health care. Women are trained as community health workers who visit the homes of neighbors, checking on family health and selling low-cost treatments for malaria, mosquito nets, condoms and vitamins.

Through this program, Straw met Saleeka, a 15-year-old boy who had been abandoned by his parents and was living with his aunt and siblings. He went to Living Goods to find work. The staff was surprised to see Saleeka because they didn’t typically hire boys, especially someone so young. He told them he needed the money in order to attend school and take care of his brothers and sisters. They decided to give him a try.

Within a few months, Saleeka was the top seller at $1,200 of merchandise per month. He returned to school and continued working weekends, and now provides food for his entire family, pays for his siblings’ education and is currently third in his class for academics.

“What’s so inspiring to me is this is a kid who, traditionally, we would’ve said, ‘Oh my gosh, can we sponsor him?’ but that wouldn’t have paid for his clothes or food,” Straw said. “He’s now taking care of this entire extended family because of his job and work. He’s just incredible.”

Nonprofit management expert, Wertamn, agrees that skill building is ultimately more effective than simply giving someone a donation. That’s one of the reasons he’s not a fan of the one-for-one model.

“So teach me how to make shoes, give me a job making shoes,” Wertman said. “That works, but just handing a free shoe, that’s very temporary help.”

Straw hopes to be more than a temporary fix. She wants The Adventure Project to create a million jobs and believes the possibility is there.

“I have full confidence that she has what it takes to take this to the next level,” Landers said. “I believe more than ever that giving this opportunity to people is going to get at the root of poverty and enable people to care for themselves.”

After countless hours toiling away, Straw is still just as optimistic about sparking change.

“It is a lot of work, but every day is so rewarding,” Straw said. “I think about the good in people and how many people I’ve never met, who are helping to support us every month and that’s so humbling. They work so hard and are so generous to help give other people that chance to work.”